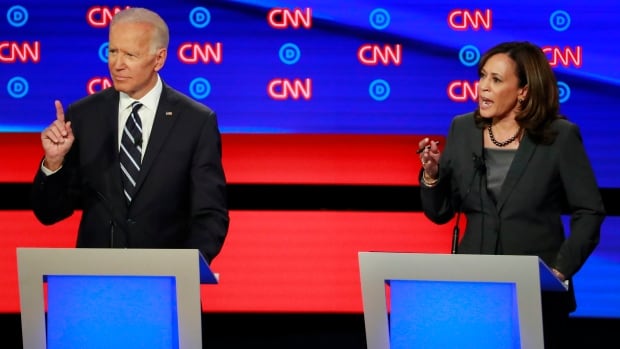 Former vice-president Joe Biden, who found himself the target of criticism from nearly half the candidates on the debate stage, was forced to defend his decades-old political record on multiple fronts as other White House hopefuls sought to tear him down.

One of his chief rivals, California Sen. Kamala Harris, charged that Biden’s past work with segregationists in the Senate could have prevented Barack Obama from becoming the nation’s first black president, and stopped her and fellow presidential candidate Cory Booker, both of whom are black, from becoming senators.

When pressed, Biden repeatedly leaned on his relationship with Obama.

“We’re talking about things that occurred a long, long time ago,” Biden said, adding, “Everybody’s talking about how terrible I am on these issues. Barack Obama knew who I was.”

Biden and Harris also had a spirited exchange over health care, with Harris saying Biden’s plan was too timid. The former vice-president said the senator’s plan was vague and far too expensive.

But it was the discussion of race that marked an escalating rift in the Democratic primary just two weeks after President Donald Trump issued racist calls for four female congresswomen of colour to leave the country, even though all of them are American citizens. Over the weekend, Trump again took aim at a prominent congressman of colour, charging that “no human being would want to live” in his “rat-infested” Baltimore district, which has a large black community.

This is an internal fight many Democrats do not want, fearing it could alienate some white voters they would like to reclaim from Trump in 2020. For Biden’s struggling competitors, however, they see no better way to undermine his candidacy than raising questions about his commitment to black voters.

Colorado Governor Michael Bennet, considered a moderate, urged his fellow presidential hopefuls to stop debating issues of segregation in the past and focus on the pressing problems of today, which include improving access to education for all.

WATCH | Segregation is still happening: Colorado Sen. Michael Bennet implores his fellow Democrats to stop focusing on the past:

Colorado Senator Michael Bennet tells his fellow Democrats on the debate stage Wednesday to stop debating the past and deal with the urgent problem of unequal access to education. 1:10

While Biden took many hits on the stage, there were multiple opponents aiming for Harris as well. Hawaii Rep. Tulsi Gabbard tore into Harris’s record as a prosecutor and attorney general in California.

WATCH | ‘You owe them an apology’: Hawaii Rep. Tulsi Gabbard grills Sen. Kamala Harris on decisions she made as attorney general in California:

Hawaii Rep. Tulsi Gabbard challenges California Sen. Kamala Harris on her prosecutorial record, saying she kept prisoners locked up longer than they needed to be. 2:08

WATCH | ‘Our house is on fire’: Jay Inslee urges action on immigration:

Washington Gov. Jay Inslee urges action on immigration, saying Americans ‘can no longer allow a white nationalist to be in the White House,’ at the second night of Democratic presidential debates. 0:37

The evening opened with a spirited exchange over the future of health care. Biden charged that Harris’s plan would cost taxpayers $ 3 trillion US even after two terms in office and would force middle-class taxes to go up, not down. He said that would put Democrats at a disadvantage against Trump.

“You can’t beat President Trump with double talk on this plan,” he said.

Harris slapped back that Biden was inaccurate.

“The cost of doing nothing is far too expensive,” Harris said. She added, “Your plan does not cover everyone in America.”

There were also tense exchanges on immigration that pitted the 76-year-old Biden against a younger slate of more diverse candidates. There were no candidates of colour onstage in the first wave Tuesday night. On Wednesday night, there were four.

Biden was flanked by Harris on one side and Booker on the other. As Biden greeted Harris onstage moments before the opening statements, he quipped, “Go easy on me, kid.”

New Jersey Sen. Cory Booker calls out Democrats for infighting, and for pitting progressive candidates against moderates. ‘That to me is dividing our party,’ and distracting from the real enemy, he said. 0:21

Biden suggested that some of his rivals favour immigration laws that are far too forgiving. Castro, for example, would decriminalize illegal border crossings.

“People should have to get in line. That’s the problem,” Biden charged.

Castro shot back, saying, “It looks like one of us has learned the lessons of the past and one has not.”

WATCH | Julián Castro accuses Biden of not learning from his past:

Julian Castro called out Joe Biden over the issue of immigration, saying, ‘It looks like one of us has learned the lessons of the past, and one of us hasn’t.’ Describing the U.S. immigration system as broken, Castro asserted that Americans need ‘politicians that actually have some guts on this issue.’ 1:19

While the first primary votes won’t come for six more months, there is a sense of urgency for the lower-tier candidates to break out. More than half the field could be blocked from the next round of debates altogether — and possibly pushed out of the race — if they fail to reach new polling and fundraising thresholds implemented by the Democratic National Committee.

The dire stakes have forced many Democrats to turn away from Trump and turn against one another in recent weeks.

Diversity was an early focus.

Biden said Trump was tearing at the “fabric of America” and highlighted the value of diversity in his opening statement.

New York Mayor Bill de Blasio presses former U.S. vice-president Joe Biden on the issue of trade. He says Democrats can’t be party to another version of NAFTA, which he argues would take away jobs. 0:53

“Mr. President, this is America,” Biden said of the diverse slate of candidates on stage.

“This becomes a moment we must fight for the best of who we are,” Harris said. “We are better than this.”

Booker jabbed Biden at times, even as he warned that Democrats were handing Trump an easy issue by ridiculing one another’s plans.

“That, to me, is dividing a party and demoralizing us in the face of the real enemy here,” he said.

Former vice-president Joe Biden is questioned by New York Sen. Kirsten Gillibrand and California Sen. Kamala Harris on his past positions on women working outside of the home and reproductive rights. 2:36