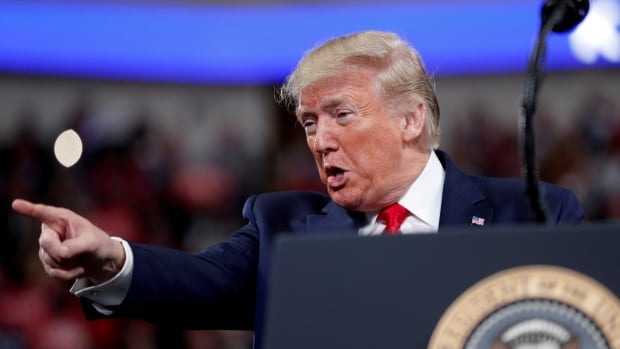 The  Democratic-led U.S. House judiciary committee launched a lively, marathon session Thursday ahead of voting on articles of impeachment against President Donald Trump, a historic step as the deeply partisan panel prepares to send the charges to the full House.

Committee chair Jerrold Nadler of New York immediately asked for a full reading of the nine-page resolution, airing the two articles against the president introduced by Democrats for the live TV cameras. They charge Trump with abuse of power for asking Ukraine to investigate Democratic presidential candidate and former vice-president Joe Biden while withholding nearly $ 400 million in aid as leverage, and with obstruction of Congress for stonewalling the House’s investigation.

The top Republican, Rep. Doug Collins of Georgia, swiftly interjected that the proceedings are a “farce” and should be halted until their side is provided its own chance for a hearing. The request was denied, with the chairman saying the process was in line with the impeachment hearings of Richard Nixon or Bill Clinton.

It is expected to be a long day of fights over amendments, primarily by Republicans trying to stop the impeachment. They are likely to be rejected by Democrats on party lines.

Ohio Republican Jim Jordan insisted Democrats are impeaching because “they don’t like us” and read out a long list of Trump’s accomplishments.

Nadler said the committee should consider whether the evidence shows that Trump committed these acts, whether they rise to the level of impeachable high crimes and misdemeanours and what the consequences are if they fail to act.

“When his time has passed, when his grip on our politics is gone, when our country returns, as surely it will, to calmer times and stronger leadership, history will look back on our actions here today,” Nadler said. “How would you be remembered?”

Democrat in disbelief that Republicans could see Trump as anti-corruption crusader. 0:47

Republicans have argued that the aid was eventually released to Ukraine — it was released on Sept. 11, two days after committees in the Democratic-led House launched an investigation into efforts by Trump to pressure Ukraine — and that the president has the right to ensure countries who receive American aid are doing enough to root out corruption.

Maryland Democrat Jamie Raskin said he found it an astounding argument, given that Trump has had to pay millions as a result of allegations of corruption surrounding his Trump Foundation as well as the now-defunct Trump University.

“What do you know, you pick up the New York Times yesterday, President Trump had to pay $ 2 million US to charities because he ripped off his own charity. This is the anti-corruption crusader they want us to believe in,” said Raskin, adding that Trump reduced anti-corruption funding for Ukraine.

On Thursday, the committee will likely vote to send the articles to the full House, which is expected to vote next week.

House Speaker Nancy Pelosi sounded confident Democrats will have the votes to impeach the president next week but said it is up to individual lawmakers to weigh the evidence and decide for themselves.

‘”The fact is, we take an oath to protect and defend the Constitution of the United States,” Pelosi told reporters. “No one is above the law; the president will be held accountable for his abuse of power and his obstruction of Congress.”

Thursday’s hearing picked up where Wednesday’s late-night session left off.

Into the night, Democrats and Republicans delivered sharp, poignant and, at times, personal arguments for and against impeachment. Both sides appealed to Americans’ sense of history — Democrats describing a strong sense of duty to stop what one called the president’s “constitutional crime spree” and Republicans decrying the “hot garbage” impeachment and what it means for the future of the country.

The articles of impeachment

In the impeachment context, abuse of power is generally defined as using the vast powers of the presidency for personal benefit.

Abuse of power is not specifically listed as an impeachable offence in the U.S. Constitution, which states that a president can be removed from office for “treason, bribery, or other high crimes and misdemeanours.”

But the founders of the United States intended the phrase “other high crimes and misdemeanours” to broadly encompass abuses of power, legal scholars said.

Democrats levelled the obstruction charge based on Trump’s stonewalling of the House’s impeachment inquiry.

The White House has refused to provide documents to congressional investigators and has instructed top advisers and government officials to defy subpoenas and refuse to testify.

Contempt of Congress is a misdemeanour crime under U.S. law, which defines the offence as wilfully failing to provide testimony or documents to Congress.

The White House has argued that the Constitution does not require senior presidential advisers to appear for compelled testimony before Congress. A judge rejected that argument on Nov. 25 in a dispute over a subpoena issued to former White House counsel Don McGahn.

The House is expected to vote on the charges, possibly after holding a daylong debate that could involve all 431 of its current legislators. If the full House voted to approve the articles, Trump would become only the third president in U.S. history to be impeached. He would remain in office, however, pending a trial in the Senate.

If the impeachment is approved, the House would select lawmakers known as managers to present the case against Trump at a Senate trial. House Democrats say most of the managers are likely to come from the judiciary committee, and possibly from the intelligence committee that led the investigation.

Trump would face a trial in the Senate to determine whether he should be convicted and ousted from office. The Senate is controlled by Trump’s fellow Republicans, who have shown little sign they will find him guilty. A two-thirds majority of those present in the 100-member chamber would be needed to convict Trump.

U.S. Chief Justice John Roberts would preside over the trial. House managers would present their case against Trump, and the president’s legal team would respond. Senators would act as jurors. A trial could involve testimony from witnesses and a gruelling schedule in which proceedings occur six days a week for as many as six weeks.

Senate majority leader Mitch McConnell said on Tuesday a majority of the Senate could approve a shorter process by voting on the articles of impeachment after opening arguments, without witnesses.

This is the fourth time in history Congress has moved to impeach a president.

Bill Clinton was the last president impeached by the House, in 1998. As with President Andrew Johnson in the 19th century, Clinton was acquitted in the Senate. Richard Nixon resigned from office in 1974 after articles of impeachment were approved but before a Senate trial could take place.