The U.S. military will deploy more than 5,200 troops, including armed soldiers, to bolster President Donald Trump's efforts to secure the border with Mexico as a caravan of migrants treks toward the frontier, according to a senior general.

General Terrence O'Shaughnessy, the head of U.S. Northern Command, said 800 troops were already en route to the Texas border and 5,200 would be headed to the southwest region by week's end, far higher than the 800 to 1,000 initially forecast.

"That is just the start of this operation. We will continue to adjust the number and inform you of those," O'Shaughnessy told reporters. "But please know that is in addition to the 2,092 that are already employed from our National Guard" troops.

The Pentagon previously declined comment on potential troop numbers, saying that planning was still under way for a mission that risks drawing the U.S. military into a politically charged operation just days ahead of the Nov. 6 midterm congressional elections.

Listen to the U.S. general describe the air and ground deployment:

U.S. general details the deployment of 5,200 U.S. troops and equipment to "harden" the southern border against a migrant caravan making its way through Mexico. 2:47

Several hundred migrants tried to cross the Suchiate River from Guatemala to Mexico en masse on Monday, but were met by ranks of Mexican federal police who blocked them from entering.

The standoff on the riverbank followed a more violent confrontation that occurred on the nearby bridge over the river the night before, when migrants tossed rocks and used sticks against Mexico police. One migrant was killed Sunday night by a head wound, but the cause was unclear.

While migrants on the bridge had appeared to be preparing for a second day of confrontations early Monday, instead they tried the route taken by the first caravan 10 days ago after it, too, was blocked: turn to the river below. 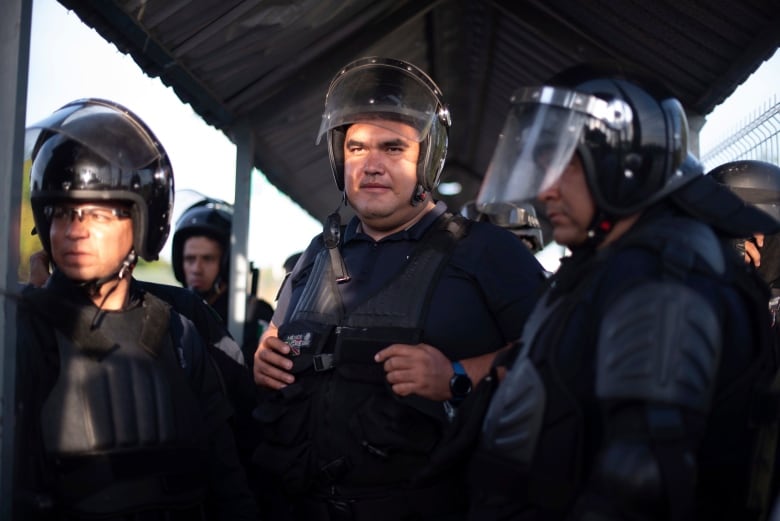 Mexican Federal Police are blocking a new group of migrants, who called themselves a second caravan, from getting across a bridge into Mexico. (Santiago Billy/Associated Press)

The first, larger caravan made it across the river by wading or on rafts, and now is advancing through southern Mexico.

But since that crossing, the Mexican Navy has begun patrolling the Suchiate River and Mexican police have taken up positions on the riverbank, insisting migrants register before entering and show travel documents that many do not have.

A Mexican helicopter hovered above a mass of several hundred migrants who had waded across the chest-high river Monday, apparently using the downdraft from its rotors to discourage them.

Earlier Monday, about 600 migrants had gathered on the bridge, where Mexican federal police had blocked one end. The migrants had gasoline bombs made of soft-drink bottles, and improvised PVC tubes to launch fireworks or other projectiles. 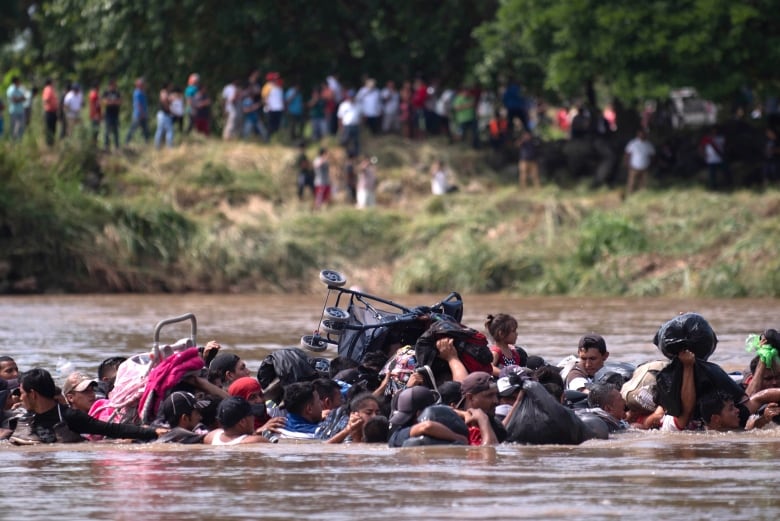 Several in the group are trying to wade across the Suchiate River, as members of the first caravan did. (Santiago Billy/Associated Press)

Trump, who has seized upon the Central American migrant caravan in campaign rallies ahead of the vote, said on Twitter that the military would be waiting for the procession.

Many Gang Members and some very bad people are mixed into the Caravan heading to our Southern Border. Please go back, you will not be admitted into the United States unless you go through the legal process. This is an invasion of our Country and our Military is waiting for you!

Last week, U.S. Defence Secretary Jim Mattis authorized the use of troops and other military resources at the U.S.-Mexico border. U.S. officials told Reuters they would begin deploying as soon as Tuesday and their mission was authorized through mid-December, a date that could be extended.

On Sunday, Mattis told reporters that some construction materials were already being moved to the border, including barriers. He said the defence department was still planning the logistics and details of the deployment.

Mattis suggested the mission would take time to develop, saying it would be a "phased" operation.

Departure from past practice

Trump's decision to call in the military appears to be a departure from past practice, at least in recent years, in which such operations were carried out by National Guard forces — largely part-time military members who are often called upon to serve in response to domestic emergencies.

On Sunday, the migrants broke through border barriers on the Guatemalan side of the bridge, only to confront Mexican police, who blocked them from entering Mexico.

Guatemala's Interior Ministry said the second group had wounded Guatemalan police and used children as human shields, and Guatemalan firefighters confirmed that a 26-year-old Honduran had been killed from a blow to the head.

While migrants claimed he was hit by a rubber bullet, Mexican Interior Secretary Alfonso Navarrete Prida denied that his country's forces had firearms or anything that could fire rubber bullets.

Navarrete Prida said Mexican federal police and immigration agents were attacked with rocks, glass bottles and fireworks when migrants broke through a gate on the Mexican side of the border, but were prevented from entering. Navarrete said some of the attackers carried guns and firebombs. There was no evidence that the first caravan had come with weapons.

"The Mexican government rejects the acts of violence on the border with Guatemala, and reiterates that the only way to enter Mexico is to obey immigration laws," he said.

Meanwhile, some of the migrants in the initial caravan, now estimated at 4,000 people, began walking, and increasingly riding, from Tapanatepec, to Santiago Niltepec, 54 kilometres to the northwest.

While catching rides from passing trucks had been a largely impromptu habit in the first week of the caravan, it has now become more organized. On Monday, more than 100 migrants lined up at a gas station parking lot to wait for rides.

Mayor Ramiro Nolasco of the town of Zanatepec said local people had organized a bus and several trucks to carry migrants, mainly women and children.

"We are helping our brothers from other countries with food, water, and transportation," Nolasco said. "It is going to be very little, compared to what they need."

The caravan still must travel roughly 1,600 kilometres to reach the nearest U.S. border crossing at McAllen, Texas. The trip could be twice as long if the migrants head for the Tijuana-San Diego frontier, as another caravan did earlier this year. Only about 200 in that smaller group made it to the border.

Most of the migrants in the caravan appeared determined to reach the U.S., despite an offer of refuge in Mexico.

Mexican President Enrique Pena Nieto launched a program Friday dubbed "You are home," which promises shelter, medical attention, schooling and jobs to Central Americans who agree to stay in the southern Mexico states of Chiapas or Oaxaca, far from the U.S. border.

Mexico's interior minister said Sunday that temporary identity numbers had been issued to more than 300 migrants, which would allow them to stay and work in Mexico. The ministry said pregnant women, children and the elderly were among those who had joined the program and were now being attended at shelters.

He said 1,895 had applied for refugee status in Mexico.