A comedian whose only political experience consists of playing a president on TV appeared poised to reprise the role in real life when an exit poll showed him winning Ukraine’s presidential runoff Sunday in a landslide.

Results from the exit poll after voting stations closed showed Volodymyr Zelenskiy receiving an extraordinary 73.2 per cent — or nearly three out of every four votes cast — to President Petro Poroshenko’s 25.3 per cent.

If borne out by election returns, the overwhelming victory by Zelenskiy would stand as a crushing rebuke to Poroshenko’s five years in office and a verdict on the country’s deep-seated corruption, sickly economy and grinding war against Russian-backed separatists in the country’s east that has killed over 13,000 people.

While official returns had yet to be released, Poroshenko accepted defeat, saying: “I am leaving office, but I want to firmly underline that I am not leaving politics.”

Zelenskiy, for his part, vowed after the release of the exit polls: “I promise I will never let you down.” And he suggested that his apparent victory could be a model for other former Soviet states that want to move forward from ossified politics.

“To all the countries of the former Soviet Union — look at us, everything is possible,” he said. 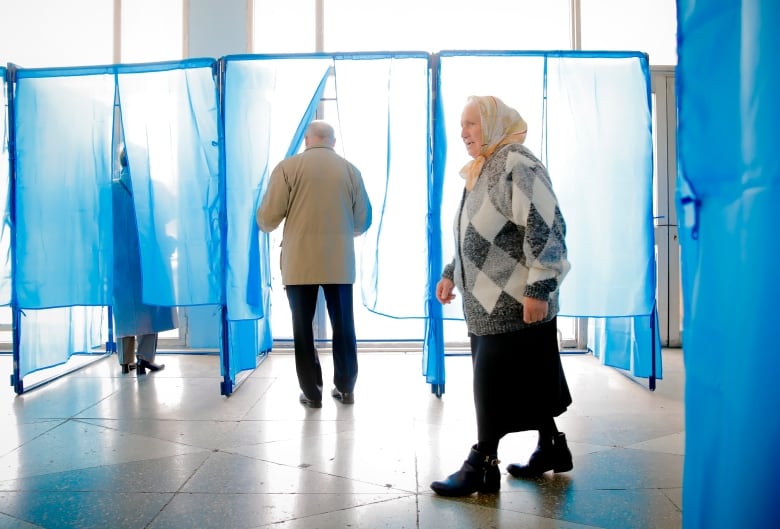 People cast their ballots in Kyiv on Sunday. Millions of people living in the rebel-controlled east and in Russia-annexed Crimea were unable to vote. (Vadim Ghirda/Associated Press)

Although Zelenskiy was criticized for a vague campaign platform and never holding public office, voters appeared to cast aside those concerns in favour of a thorough sweep of Ukraine’s political leadership.

“I have grown up under the old politicians and only have seen empty promises, lies and corruption,” said Lyudmila Potrebko, a 22-year-old computer programmer who voted for Zelenskiy. “It’s time to change that.”

Zelenskiy, 41, became famous nationwide for his comic portrayal in a Ukrainian TV series of a high school teacher who becomes president after a video of him denouncing corruption goes viral.

Poroshenko was a billionaire candy magnate and former foreign minister before he took office in 2014 after huge street protests drove his Russia-friendly predecessor to flee the country. Although he instituted some reforms, critics said he had not done nearly enough to curb corruption.

Millions of people living in the rebel-controlled east and in Russia-annexed Crimea were unable to vote. Russia seized Crimea in 2014, and fighting in the east erupted that same year.

‘We have grown poor under Poroshenko’

The incumbent campaigned on the same promise he made when he was elected in 2014: to lead the nation of 42 million into the European Union and NATO. However, those goals have been elusive amid Ukraine’s many problems. A visa-free deal with the EU led to the exodus of millions of skilled workers for better living conditions elsewhere in Europe.

In a jab at his politically inexperienced rival, the president warned voters that “it could be funny at first, but pain may come later.”

Poroshenko emphasized the need to “defend achievements of the past five years,” noting the creation of a new Ukrainian Orthodox Church that is independent from Moscow’s patriarchate, a schism he championed. 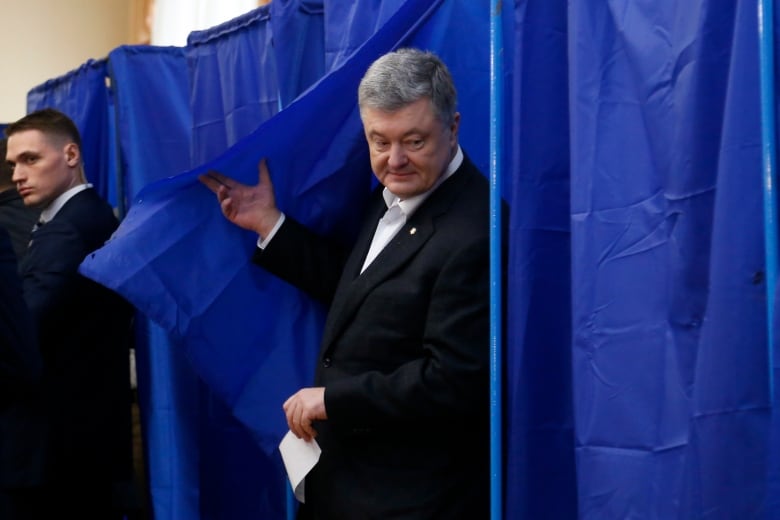 “Poroshenko has done a lot of good things for the country — creating its own church, getting the visa-free deal and taking Ukraine away from the empire,” said 44-year-old businessman Volodymyr Andreichenko, who voted for him.

But Poroshenko’s message fell flat with many voters struggling to survive on meagre wages and pay soaring utility bills.

“We have grown poor under Poroshenko and have to save to buy food and clothing,” said 55-year-old sales clerk Irina Fakhova. “We have had enough of them getting mired in corruption and filling their pockets and treating us as fools.”

Poroshenko has denied any link to an alleged embezzlement scheme involving one of his companies and a top associate.

Like Poroshenko, Zelenskiy pledged to keep Ukraine on its pro-Western course, but said the country should only join NATO if voters give their approval in a referendum. He said his top priority would be direct talks with Russia to end the fighting.

Zelenskiy’s image has been shadowed by his admission that he had commercial interests in Russia through a holding company, and by his business ties to self-exiled billionaire businessman Ihor Kolomoyskyi. Kolomoyskyi owns the TV station that aired the actor’s sitcom and his other comedy shows.

“Both candidates stand for integration into Europe, both kneel to honour those killed in the war with Russia, both are linked to oligarchs,” 67-year-old teacher Dmytro Volokhovets said with a touch of sarcasm. “But Zelenskiy will win because he’s young and new.”