Welcome to The National Today newsletter, which takes a closer look at some of the day's most notable stories. Sign up here and we'll deliver it directly to your inbox Monday to Friday.

The number of new HIV infections is declining, more people than ever are receiving treatment and deaths due to the disease and its complications are falling, but progress remains precarious, warns a new UN report.

Released today in Paris, the report — entitled Miles to go—closing gaps, breaking barriers, righting injustices — identifies some worrying trends, noting that the rate of infection is still rising in 50 countries, and that most of the treatment benefits affected adults, not children.

"We are sounding the alarm," Michel Sidibé, the executive director of UNAIDS, told reporters. "Entire regions are falling behind, the huge gains we made for children are not being sustained, women are still most affected, resources are still not matching political commitments and key populations continue to be ignored."

In 2014, UN members pledged to end the global AIDS epidemic by 2030. But the report says that the world risks missing many of the ambitious shared targets.

Among its key findings:

Overall, it is estimated that 80 million people have been infected, and 35.4 million have died since HIV was identified in the early 1980s.

The report finds that there has been significant progress in eastern and southern Africa — the region most affected by HIV — with a 30 per cent reduction in new infections since 2010. But those gains are being offset by a doubling of new cases in eastern Europe and central Asia, and a 25 per cent increase in North Africa and the Middle East. 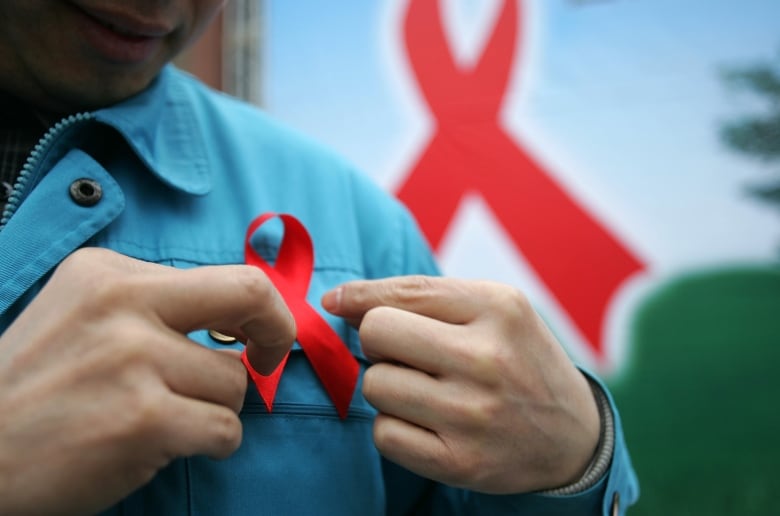 West and central Africa continue to be a problem. Nigeria, for example, has seen 51 per cent of all new cases in the region, but only 33 per cent of its people living with HIV are receiving treatment.

The number of children still being infected is also a concern, with 180,000 kids acquiring HIV via breastfeeding in 2017, far off the 2018 goal of 40,000 such cases. And only 52 per cent of children with HIV are receiving treatment, while 110,000 died from the disease last year.

Key populations now account for 47 per cent of all new HIV infections worldwide.

"We are short $ 7 billion per year to maintain our results and to achieve our objectives for 2020," Sidibé told Agence France Presse. "Without these resources, there is a big risk of the epidemic rebounding, of an increase in mortality due to AIDS."

And significant treatment gaps remain. In North America and Europe, 78 per cent of people with HIV received Antiretroviral drugs, compared to 40 per cent in west and central Africa and less than one-third in the Middle East and north Africa.

There are questions, however, about whether Sidibé is the right person to be leading the world's HIV fight.

The UNAIDS director has been reprimanded over his handling of a sexual assault allegation against his former deputy by another staffer at the Geneva-based organization. An internal UN probe found that the Malian diplomat erred by trying to settle the matter before an official investigation was completed, and in criticizing whistleblowers.

"I don't anticipate leaving my post," he told reporters in Paris. "I don't back away from difficult issues. I need to deliver on my job."

Iraqis vent anger in the streets

​Anti-government protests continue to spread across southern Iraq, even as authorities in Baghdad block access to the internet in an effort to stop demonstrators from sharing images and coordinating their efforts.

The protests, which started on July 8 in Basra, have flared up in at least eight other provinces, with locals taking to the streets to air their grievances about high unemployment, a lack of government services, corruption and the country's failing economy. 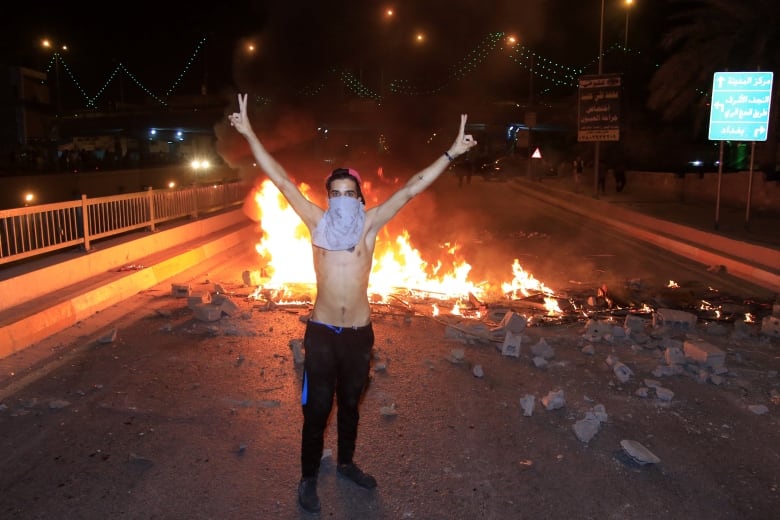 Angry crowds have stormed government buildings and burned the local offices of Prime Minister Haider al-Abadi's Dawa Party. At least eight people have died in the sometimes violent clashes, and more than 260 police have been injured.

In Basra, the centre of Iraqi oil production, the public rage is focused on the billions in oil revenue that have flowed into the central government's coffers since Saddam Hussein's 2003 overthrow — money that never seems to find its way back to the regions.

But other Iraqis have different complaints. In Najaf, it's corrupt administrators of the local airport. In Ammara and Dhi Qar, people are upset about the shortage of electricity and clean drinking water. And in some areas, anger is being directed at Iran for perceived meddling in Iraqi affairs.

The Iraqi government has suggested that Hussein's Baathist holdovers, or perhaps the Islamic State or even the Saudis, are behind the protests.

But to date, Prime Minister al-Abadi has been unable to figure out a way to halt them. Last weekend, he travelled to Basra to offer $ 3 billion in service improvements, along with a promise to divert some of Mosul’s power supply to the southern city. And the clashes only intensified. 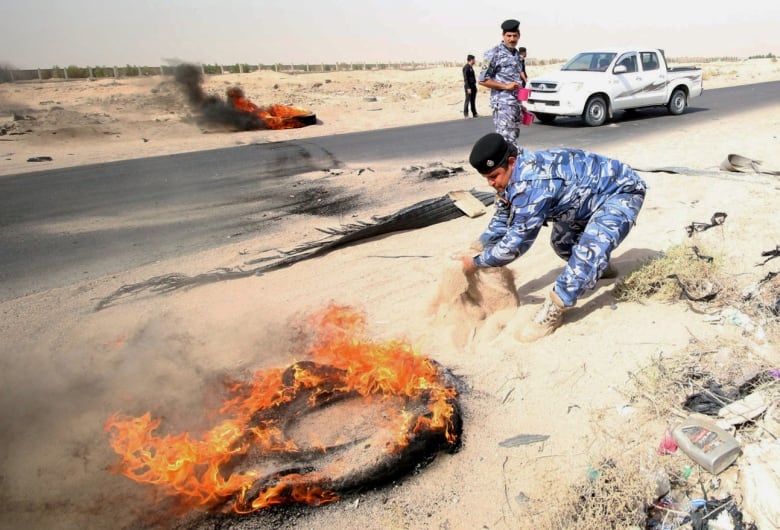 Iraqi policemen throw sand to stifle a blaze during a protest at the main entrance to the Zubair oilfield near Basra, Iraq, in July. (Essam al-Sudani/Reuters)

Starting last Friday, he also curbed web access across vast portions of the country, all but shutting down the financial system, air travel and news coverage of the protests. Some service has since been restored, but social media platforms like Facebook and WhatsApp remain blocked.

Arrests have been stepped up in an effort to quell the protests, and several units of Iraq's elite counterterrorism force have been pulled away from mop-up operations against the remnants of the Islamic State and redeployed to the south.

Iraq has been without an elected government since an inconclusive and unenthusiastic vote in early May. The Sairoun movement, led by the firebrand cleric Muqtada al-Sadr, won the most seats in parliament, but fell far short of a majority.

A manual recount of all ballots, ordered by al-Abadi in early June, is still underway.

One hundred years after their assassination by Bolsheviks, there are new hopes that Russia's last Tsar and his family may finally receive a full religious burial.

Earlier this week, the Kremlin announced that a new round of DNA tests on the bones that many believe belong to Nicholas II, his wife and their five children have confirmed their authenticity.

The Romanovs were executed by a firing squad at a country home near Yekaterinburg on July 17, 1918, and their bodies were dumped in a mineshaft before being burned and buried. Most of the bones were recovered by historians in 1979, but the find was only publicly revealed after the fall of the Soviet Union in 1991. 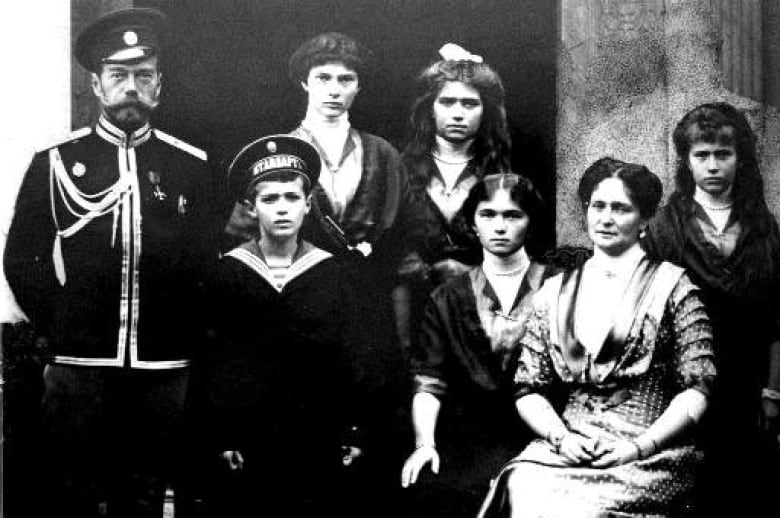 "Genetic examination results showed that seven of the 11 found remains correspond to the mother, father, four daughters and son of the family," the Russian government committee said in statement posted online.

(Investigators believe that four attendants, including the royal doctor, were murdered and buried along with the family.)

The committee said that Nicholas II's bones were identified by comparing them to the remains of his father, Tsar Alexander III, who was assassinated in 1881.

The British press reports that Prince Philip also played a key role. The 97-year-old Duke of Edinburgh is the grand-nephew of the last Tsarina, and provided a sample of his blood to experts in 1993 that was used in the matching process.

It's not the first time that the Kremlin has authenticated the remains. Boris Yeltsin's government undertook a lengthy investigation in the 1990s — including DNA tests — and later interred what it said were the bones of Nicholas, his wife and three of their daughters in Saint Petersburg in 1998.

"By burying the remains of innocent victims, we want to atone for the sins of our ancestors," the Russian president said in a speech at the ceremony. "Those who committed this crime are as guilty as are those who approved of it for decades. We are all guilty." 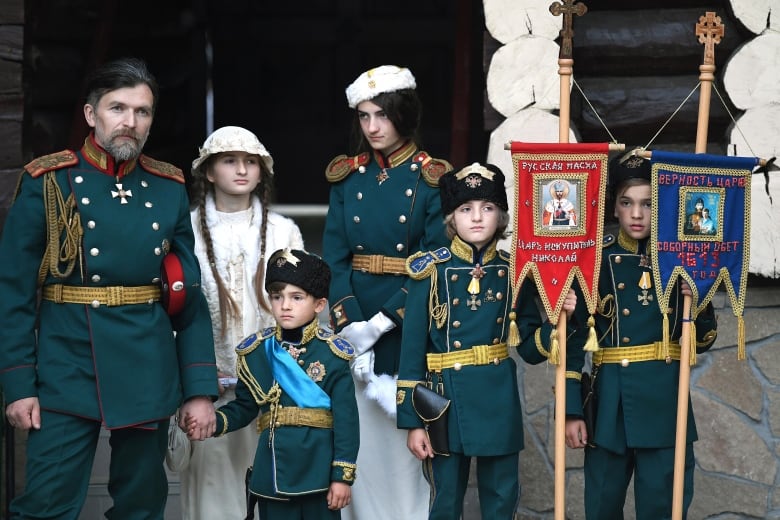 These re-enactors marked the centenary of the execution of the Russian royal family. (Donat Sorokin/TASS via Getty Images)

But the Russian Orthodox Church disputed their authenticity after being shut out of the government probe. And it has refused to bury the Tsar's son Alexei and his daughter Maria, since their remains were recovered from a separate grave in 2007.

The Church, which declared the Romanovs martyrs in 2000, launched its own study of the bones and the evidence surrounding the murders in 2015. But it's not clear if they will accept the new findings.

Last November, the head of the Church probe, Bishop Tikhon Shevkunov announced that the committee was investigating a new theory — that the Romanovs were victims of a "ritual murder."

Shevkunov's statement appeared to be a nod to a long-standing anti-Semitic conspiracy theory that Nicholas II was the victim of a Jewish plot, rather than a Bolshevik one.

Jewish groups in Russia denounced the move as a display of "medieval ignorance."

A few words on…

"We as a society have to start recognizing the fact that hate is alive here."

David Milgaard was freed from jail in 1992, after the Supreme Court of Canada recommended his conviction for the 1969 murder of a Saskatoon nurse's aide, Gail Miller, be set aside. But this was the day a British lab exonerated him, finding that the DNA left on Miller's clothing wasn't his, but rather belonged to another suspect, Larry Fisher. Calls by Milgaard and his mother, Joyce, for a public inquiry into his wrongful conviction were eventually heeded. Milgaard received $ 10 million in compensation — $ 435,000 for each year he spent behind bars.