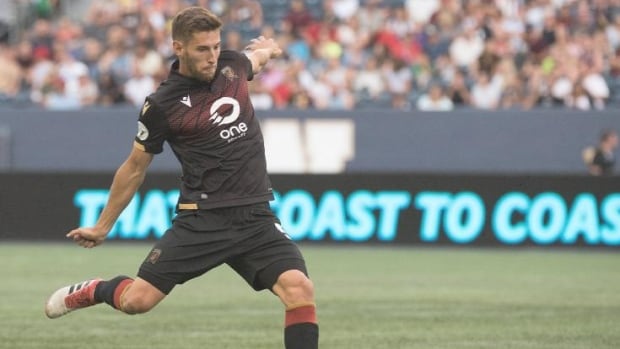 For the second time in a row, Valour FC scraped a point at home with a late penalty kick, as they drew 2-2 with Pacific FC on Wednesday.

Valour opened the game on a good note, with recent signing Michele Paolucci scoring in his first start for the club. The Italian forward volleyed home a rebound in the box after his teammate Marco Bustos sent in a free kick which took a dangerous deflection.

The visitors responded as Pacific’s Ben Fisk tapped in a loose ball from the six-yard box after Valour’s defence cleared a chance off their goal line just seconds before.

On the brink of halftime, centre-back Lukas MacNaughton rose high above his opposite number in the box to score an emphatic header. Zach Verhoven’s cross found MacNaughton as a clever short corner kick from Pacific sent the Valour defenders into disarray.

Michael Petrasso scored a late penalty to give Valour FC a 2-2 draw with Pacific FC. 1:10

Valour didn’t go down without a fight, spending the second half almost entirely on the front foot and outshooting Pacific 11-4 in the last 45.

It wasn’t until the very end of the 90 minutes, however, that they’d find their reward.

Just before the clock ran into stoppage time, Valour’s Skylar Thomas was hauled down in the box and referee Mathieu Souaré pointed to the penalty spot. Petrasso, who looked sharp in his return to the lineup after well over a month on the sidelines, stepped up to score the spot kick, sending ‘keeper Nolan Wirth the wrong way.

Valour managed to hold on to their late equalizer to secure their second straight draw, earned in similar circumstances to the weekend’s 1-1 result against Cavalry FC.

FC Edmonton kept pace in the Fall chase on Wednesday, taking down a road-weary HFX Wanderers side 2-0 at home for their eighth point through five Fall matches.

The opener came after 20 minutes when a one-hit Jeannot Esua cross found Easton Ongaro who sneaked home a header through two HFX defenders, slotting in his second goal in as many matches at Clarke Stadium.

A series of mad scrambles at HFX’s goalmouth highlighted the first half as the visitors were fruitless going forward, failing to record a shot on target in the first 45 minutes.

Edmonton’s second would come moments into the second half when Tomi Ameobi was hauled down in the box by HFX defender Chrisnovic N’Sa.

The Eddies skipper converted the penalty, giving the home side a dream start to the second half.

The Wanderers failed to create much and rarely threatened in the final third through the rest of the match — managing only four touches in Edmonton’s 25-yard box through 90 minutes — on route to their fourth league defeat in a row.