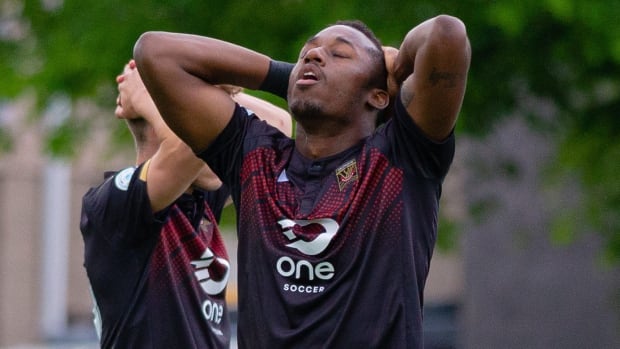 Valour FC has stripped Jordan Murrell of his captaincy in the wake of a stormy red-card exit in the Winnipeg CPL’s club 1-0 loss to HFX Wanderers in Halifax earlier this week.

Murrell was issued a straight red card for making contact with referee Filip Dujic in the 89th minute at Wanderers Grounds. The incident occurred after Murrell went down in a challenge with a Halifax player. When he got up, he pushed the referee and was promptly ejected.

WATCH | Murrell sent off after confrontation with ref:

Halifax brought home the win in front of their home crowd 1-0 over Valour. 1:00

The Valour FC defender, who had to be pulled away by a teammate after the red card, then kicked the scorer’s table on the sideline as he exited. Everything on the table went flying, much to the shock of the volunteer sitting behind it.

“It’s not acceptable. He’s apologized and rightly so.” Valour FC coach Rob Gale said Wednesday. “He knows he’s let, first and foremost, himself down because that’s not how he wants to conduct himself and it’s not his character within the community here. He’s let all the staff, the players and the club down and that’s disappointing,”

“I reacted in the heat of the moment and did not act in true representation of our team, the league, or my character,” he said. “I am very sorry for my actions and to anyone I unintentionally affected.”

Defender Skylar Thomas will take over as captain.

Valour FC (0-2-3) is bottom of the CPL’s fall competition standings. It was also in the cellar of the spring competition with a 3-7-0 record.