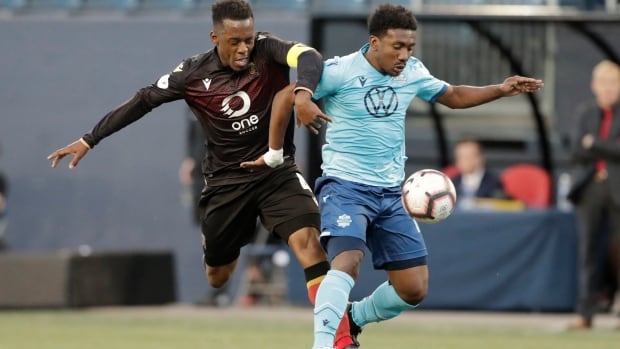 Valour FC captain Jordan Murrell has apologized for a stormy red-card exit in the Winnipeg CPL’s club 1-0 loss to HFX Wanderers in Halifax on Monday.

Murrell, who had words with the officials minutes earlier, was issued a straight red card for making contact with referee Filip Dujic in the 89th minute at Wanderers Grounds.

The incident occurred after Murrell went down in a challenge with a Halifax player. When he got up, he pushed the referee and was promptly ejected.

The Valour FC defender, who had to be pulled away by a teammate after the red card, then kicked the scorer’s table on the sideline as he exited. Everything on the table went flying, much to the shock of the official sitting behind it.

“To all the staff, Halifax supporters, officials, and all of the Valour FC supporters watching the match today, I want to state that I fully regret my actions and I apologize,” Murrell said via social media. “I reacted in the heat of the moment and did not act in true representation of our team, the league, or my character. I am very sorry for my actions and to anyone I unintentionally affected.”

Halifax brought home the win in front of their home crowd 1-0 over Valour. 1:00

“We don’t want to carry ourselves in the wrong way but sometimes it’s difficult to understand how we’ve ended up with 10 men and the other team has had 11, with balls being kicked away and other decisions,” Valour FC manager Rob Gale said after the game.

Gale thought his team deserved a stoppage-time penalty after Michael Petrasso was pulled down in the penalty box.

The 25-year-old Murrell joined Valour FC from Reno 1868 FC of the United Soccer League (USL). The Syracuse University defender was selected by Real Salt Lake in the third round, 57th overall in the 2015 MLS SuperDraft and signed with the team’s USL affiliate, Real Monarchs. He then joined the Pittsburgh Riverhounds before signing with Reno in 2016.

Born in England, Murrell and his family moved to Markham, Ont., when he was 11.