Guerrero led off the ninth inning with a double off Oakland’s Yusmeiro Petit for his first big-league hit. Drury made it a storybook finish with his first career walk-off homer — a two-run, two-out blast — in a 4-2 victory over the Athletics.

“I know I’m always one swing away,” Drury said. “So I was excited to come through for the team and help us win a big game.”

Alen Hanson came on as a pinch-runner for Guerrero and moved to third on Billy McKinney’s sacrifice bunt. After a Teoscar Hernandez lineout, Drury belted the first pitch from Petit (0-1) for his third homer of the season.

Vladimir Guerrero Jr. was 1 for 4 with a double that led to the game-winning run in his big league debut on Friday. 2:11

Walkoff dramatics aside, the night was all about Guerrero.

“I was just concentrating on every at-bat, just trying to do my job,” he said through a translator. “It was exciting.”

Rogers Centre came to life with a playoff-like atmosphere every time the top-ranked prospect came to the plate or made a play at third base.

Gates opened early at the stadium so fans could take in batting practice. With Guerrero’s father — Hall of Famer Vladimir Guerrero Sr. — watching behind the cage and loads of media on hand, the youngster belted a ball off a 300-level window above the fence in left field.

Eric Sogard’s first career lead-off homer gave Toronto a 1-0 lead but Oakland starter Mike Fiers retired the next three batters in order to set Guerrero up to lead off in the second.

WATCH | Guerrero Jr. gets standing ovation before 1st at bat:

Vladimir Guerrero Jr. grounded out to first base in his first at-bat in the big leagues. 1:06

The crowd roared during the slugger’s pre-game introduction and roared again when he took the field in his much-anticipated debut. Guerrero was even cheered when he picked up a foul ball that rolled down the third-base line and tossed it in the stands.

The 20-year-old was given a standing ovation as he walked to the plate for his first at-bat and the 28,688 spectators hung on every pitch.

Guerrero worked a 2-2 count before grounding out to first base. Fans still loudly applauded the effort.

The Blue Jays added a run in the third inning when Danny Jansen scored on a Randal Grichuk two-out single.

The 20-year-old phenom will bat fifth and play third base when he takes the field on Friday against Oakland. 19:26

Toronto starter Marcus Stroman cruised through the first three innings before giving up a leadoff single to Marcus Semien in the fourth. Guerrero’s first defensive play came later in the frame and it was a beauty.

He short-hopped a ball on the run and made a crisp throw to first base to retire Stephen Piscotty for the second out. Stroman followed up by striking out Khris Davis.

“I was probably just as excited as the entire fanbase, getting Vladdy up here,” Stroman said. “It’s like having [Duke basketball star] Zion Williamson on your team. It’s like a once-in-a-lifetime kind of talent.

“Just to have the opportunity to play with him, it’s amazing to look out there and see him behind you at third base.” 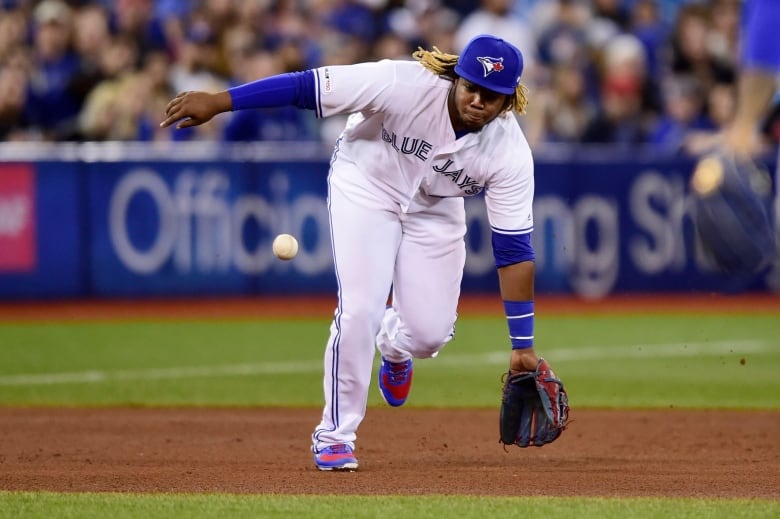 Vladimir Guerrero Jr. short-hops a ball and makes the out in the fourth inning on Friday. (Frank Gunn/Canadian Press)

Fans rose from their seats again when Guerrero led off in the bottom half of the frame.

The Montreal native put a charge into the building by belting a 3-1 pitch to deep left field but Chad Pinder made a nice leaping catch against the wall. Guerrero flew out to deep right-centre field in the sixth.

Stroman allowed one hit over seven innings but didn’t factor in the decision after Joe Biagini gave up a two-run homer to Oakland pinch-hitter Robbie Grossman in the eighth.

Stroman struck out seven batters and issued two walks over his 97-pitch outing, lowering his earned-run average to a sparkling 1.43.

“He’s throwing all his pitches for strikes,” said Blue Jays manager Charlie Montoyo. “That ball has got movement. He’s been fun to watch.”