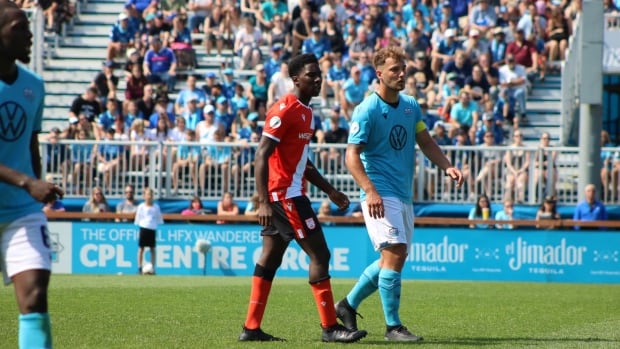 HFX Wanderers FC held league-leading Cavalry FC to a 0-0 draw at Wanderers Grounds in Halifax on Saturday, keeping the Cavs off the scoresheet for the first time in league play since June 22 and picking up a point by way of a saved penalty by Christian Oxner.

A hard-fought first half saw the two teams trade half-chances, but the stalemate was nearly broken on the hour mark, as HFX goalkeeper Oxner brought Oliver Minatel down in the box with an ill-timed tackle, drawing a penalty for the Cavs.

However, Dominique Malonga’s left-bound shot was saved by Oxner, who correctly dove to stop it, preserving a clean sheet for his team.

HFX then turned the tables, with Tomasz Skublak flicking the ball backward for Mohamed Kourouma in the box, but, despite the flashiness of the play, the subsequent shot couldn’t make it through the throng of Cavalry defenders and was deflected harmlessly away.

No one was able to find the scoresheet as Cavalry FC and HFX Wanderers FC played to a 0-0 draw. 1:15

A late push by HFX — led by substitutes Juan Diego Gutierrez and Kodai Iida — nearly yielded a go-ahead goal, with Andre Rampersad and Kourouma further testing Marco Carducci’s goal, but neither could find the breakthrough and settled for a 0-0 draw, instead.

At long last, Valour FC’s winless streak is over (snapped at 11 matches), as they triumphed 2-0 on the road over York9 FC on Saturday in Toronto.

The visitors pulled ahead early when Paolucci found the net with a long-range strike that deflected off Y9 defender Luca Gasparotto for the Italian’s second marker in a Valour uniform.

WATCH | York9 vs. Valour FC match in a minute:

Michele Paolucci’s goal in the 7th minute set the tone for Valour FC, who went on to shutout York9 FC by a 2-0 final. 1:04

The Nine Stripes took control of the match from that point, with an abundance of dangerous chances and the vast majority of possession to end the first half, but they weren’t able to find the last ball. The second half was a similar story, with York9 commanding just over 75 per cent possession as they desperately sought a goal to push their unbeaten streak at home to five games.

The home side’s opportunity came just after the hour mark, as Valour’s Adam Mitter caught the ball with his hand to send York9 to the penalty spot. Rodrigo Gattas stepped up to take the PK, firing it straight at Mathias Janssens.

The Valour keeper bravely stopped the penalty and a dangerous second chance, as referee David Barrie refused to give York9 another penalty for a hard tackle in the initial spot kick’s aftermath.

Valour’s second goal came near the end, as York9 threw everyone (including goalkeeper Nathan Ingham) into the box for a corner kick. The ball skipped out to Michael Petrasso near the halfway line, and he found the empty net from way out to bury Y9’s comeback effort.

FC Edmonton’s Easton Ongaro continued his goal-scoring streak with a brace on Saturday, sending the Eddies past visiting Pacific FC 3-1 at Clarke Stadium and putting them in a tie for top sopt in the CPL’s Fall season at 11 points.

Back-to-back goals capped off a hotly-contested first 30 minutes, starting in the 31st minute with FCE’s Oumar Diouck. The Belgian striker went unmarked at the back post, volleying a right-footed effort beautifully to take the lead.

PFC answered back less than a minute later, when a Noah Verhoeven freekick landed to Ben Fisk less than a yard from the far post.

Diouck and fellow Eddies attacker Tomi Ameobi troubled Pacific FC’s backline in open play through the first half, getting in behind and threatening on several occasions.

Ongaro kept his goal-scoring streak alive in the 47th minute, poking home a rebound for a go-ahead marker.

Ongaro wasn’t done there, though, coming through again in the 66th minute, bundling home a second goal of the game, and his fourth in three matches, giving the Eddies a two-goal advantage.

Michael Silberbauer and Pacific were unable to find a way back, as the Eddies kept the pressure on and threatened to score several times before full time.