But when a soccer field that stores and filters rainwater was installed at the school in 2015, he noticed that the health and class attendance of his pupils improved.

“We are struggling in South Africa with clean water,” said Mohlapi, standing amid a vegetable patch he grows with the filtered water.

“This was a lesson to me that water and education are linked.”

Access to water is a hot topic in South Africa — and a growing number of countries hit by climate change, burgeoning populations and poor governance — as drought last year triggered warnings that Cape Town’s taps could run dry.

The World Wide Fund for Nature South Africa (WWF) estimates that 14 million South Africans lack access to decent sanitation — in a country with 49 centimetres annual average rainfall, less than half the global average.

As a result, the community surrounding Boshoek Primary School is used to water cuts.

“We mainly access our water through boreholes,” said Mohlapi. But during times of poor rainfall, underground aquifers are not as full, and even boreholes can run dry.

“Before this field was just an empty space. Imagine if a school didn’t have water. Would we even have an education? Definitely not,” Mohlapi told the Thomson Reuters Foundation.

That led to the GreenSource initiative, funded mainly by the Dutch Ministry of Foreign Affairs, and since then nine fields have been installed across the country, including at Boshoek Primary.

The fields can store and clean up to 17 million litres of rainwater annually, or nearly 2,000 litres per hour, while children use them to play soccer.

“Pathogens — or harmful organisms — are removed from the water using a membrane which essentially sieves out harmful particles in the water,” said Paige Albyn, one of the GreenSource coordinators in South Africa.

Beneath artificial turf, rainwater is captured, stored and then pumped into the filtration device kept in a container alongside the field.

In drier months, when there is no rain to capture at all, the system links to a sustainable source, such as well water, as a supplement.

⚽️🚰 This football pitch in South Africa can store and filter rainwater <br><br>In a country where 1 in 4 people don’t have access to clean water, the initiative is improving the health of residents l <a href=”https://twitter.com/hashtag/PropertyRights?src=hash&amp;ref_src=twsrc%5Etfw”>#PropertyRights</a> <a href=”https://t.co/zWxvRqq4d2″>pic.twitter.com/zWxvRqq4d2</a>

“The water is tested before the fields are installed. We don’t work in areas where clean drinking water is already accessible,” Albyn said.

But some water sources are so badly polluted by sewage and acidic mine drainage that even the fields are unable to help these schools, she added.

To tackle water contamination, 20 water advocacy groups formed the South African Water Caucus in 2002 — a collection of charities to monitor water management in the country.

The group published a report in 2017, calling for urgent action to be taken to upgrade wastewater treatment works that would better filter sewage into clean drinking water.

Currently, 56 per cent of the systems filtering sewage in the country have been labeled as being in a “poor or critical state,” according to the Federation for a Sustainable Environment, which campaigns against water pollution caused by mining.

“New innovations are desperately needed in South Africa if we are to cater to the needs of the country’s nearly 60 million population,” Albyn said.

South Africa’s Department of Water and Sanitation said it planned to set up an independent regulator to improve water management in the country. 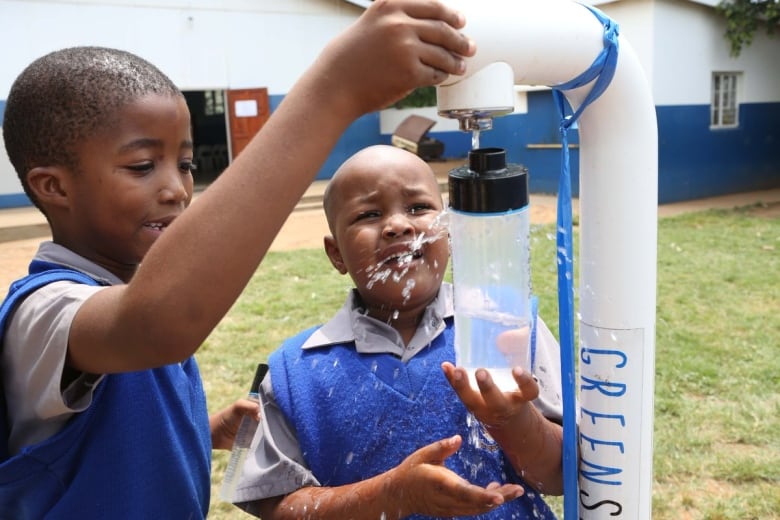 Children at Boshoek Primary School in South Africa fill up a water bottle from a tap. GreenSource has plans to install fields in 13 other South African schools in 2019. (GreenSource)

This could become more essential as the country was recently plunged into darkness with widespread power cuts after years of poor electrical power station maintenance.

Currently, each field provides water to an estimated 2,400 individuals.

For Lucky Motaung, a cleaner at Boshoek Primary, having access to clean water has had an impact on his lifestyle and his pocket.

“The clean water is used to grow the vegetables that staff and children are able to eat,” he said. “I now save money on groceries, about 150 rand ($ 14) per month. It adds up.”

“I use the saved money to buy clothes for my children,” he added.

By the end of the year, GreenSource plans to expand into 13 schools across the country, and hopes to roll out the technology in other African countries in the near future.

For Mohlapi, this could mean better health and education for thousands more pupils.

“I use the field and the clean water as a classroom. I teach them about science, technology and nature in way that is real to them. Plus, the field keeps them active,” Mohlapi said. “Active bodies, active minds.”

But GreenSource’s water supply at Lekwakwa Primary School meant the children came to school with something new: empty plastic containers.

They returned home with enough water to help parents with cooking and cleaning until the water cuts ended.

“Water scarcity is a human rights issue that needs to be addressed globally,” said Albyn.

“Let’s not wait to make sure every student can access their right to clean drinking water.”