As part of its goal to end long-term boil water advisories for First Nations reserves, the federal government has added nearly 250 more drinking water systems to its list of those eligible for public monies, meaning it will have to address many more advisories than it originally intended.

In the past federal election campaign, Prime Minister Justin Trudeau vowed to end all such advisories by March 2021 to finally deliver clean drinking water for all First Nations peoples.

While progress has been made in the first two years of government, the list of long-term advisories still stands at 67 — a number that increased to 91 on Tuesday as a result of the new systems receiving federal supports.

These systems are ones that are considered “public” — in that they operate at fire halls, community or healing centres and other such buildings on reserve — but weren’t previously see as the domain of the federal government.

Thus, a total of 1,047 drinking water systems will now eligible for supports from Indigenous Services Canada, the five-month old department created by the government to better provide services to First Nations, Metis and Inuit peoples. 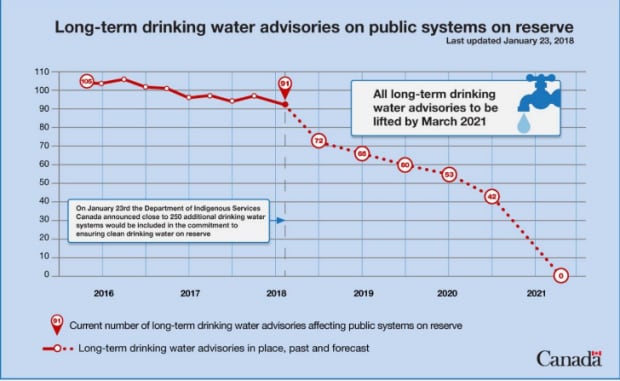 The government forecasts the number of long-term boil water advisories will fall to zero by 2021. (Indigenous Services Canada)

Despite the additions, Indigenous Services Minister Jane Philpott said the Liberals will still meet their intended goal of ending these water advisories in the same timeframe. Not only will they stick to the March 2021 completion date, but Philpott said they are committed to “accelerating” the pace of construction and renovation for affected water systems.

“I want to reiterate … we have been very clear with the department, we must get this done, we are firm on the commitment that the prime minister has made and we will get the work done,” Philpott told reporters at a press conference Tuesday.

The Parliamentary Budget Officer (PBO) warned in a December report that the federal government was simply not spending enough to put an end to the advisories, estimating it had allocated only 70 per cent of the needed funds — figures that did not account for the new additions.

Philpott said two-thirds of the $ 2 billion allocated to address water systems in Budget 2016 remains unspent. There is another pool of money, some $ 4 billion that is allocated to Indigenous infrastructure writ large, that could also be tapped. She said “any additional resources required” will be made available to accomplish their goal.

Since 2015, 40 boil water advisories were lifted but 26 others were added to the list.