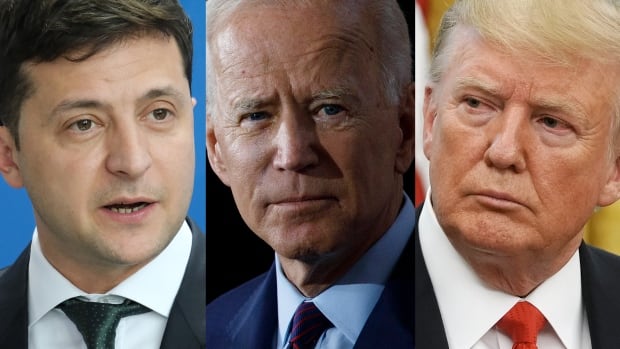 A redacted version of a whistleblower complaint at the centre of an impeachment probe against U.S. President Donald Trump was released Thursday, and alleges Trump abused his office’s power during a phone call with Ukraine’s president.

The nine-page document was released ahead of testimony to House investigators from Joseph Maguire, the acting director of national intelligence, who had released the complaint to Congress and the public this week after weeks of delay.

The still-unnamed whistleblower, who filed the complaint on Aug. 12, said they were reporting an “urgent concern” regarding Trump’s behaviour while on a phone call this summer with Ukrainian President Volodymyr Zelensky.

“I am deeply concerned that the actions described below constitute ‘a serious or flagrant problem, abuse, or violation of law or executive order’ that ‘does not include differences of opinion concerning public policy matters,’ consistent with the definition of an ‘urgent concern,'” the nine-page redacted report said, quoting the whistleblower in part.

The concerns cite Trump’s July 25 call with Zelensky in which Trump prodded the Ukrainian president to investigate Democratic political rival Joe Biden, as being part of “ongoing concerns.”

In the days following the phone call, senior White House officials intervened to “lock down” all records of the call, the report said.

The complaint said the whistleblower learned about the effort from “multiple U.S. officials.”

The whistleblower’s statement also raises concerns about the role of Trump’s lawyer, Rudy Giuliani, in seeking assistance from Ukraine to benefit the president’s 2020 re-election campaign.

It suggests Ukrainian leadership was “led to believe” that the phone call between Trump and Zelensky was conditional to whether Zelensky “showed willingness to “play ball” on issues raised by Giuliani.

Giuliani had publicly stated his intention to secure from Ukraine derogatory information about Biden and his son Hunter.

Trump quickly denounced the report, tweeting in all capitals only minutes after its release that:

THE DEMOCRATS ARE TRYING TO DESTROY THE REPUBLICAN PARTY AND ALL THAT IT STANDS FOR. STICK TOGETHER, PLAY THEIR GAME, AND FIGHT HARD REPUBLICANS. OUR COUNTRY IS AT STAKE!

The White House claims the complaint “shows nothing improper.”

Press secretary Stephanie Grisham argued the complaint “is nothing more than a collection of third-hand accounts of events and cobbled-together press clippings.”

Grisham said Trump released a rough transcript of his call with Zelensky on Wednesday “because he has nothing to hide.”

She said, “The White House will continue to push back on the hysteria and false narratives being peddled by Democrats and many in the mainstream media.”

However, House Democrats who have read the document say it’s “deeply disturbing.”

Schiff said the whistleblower shows “more of a dedication of country, more of an understanding of the president’s oath of office, than the president himself.”