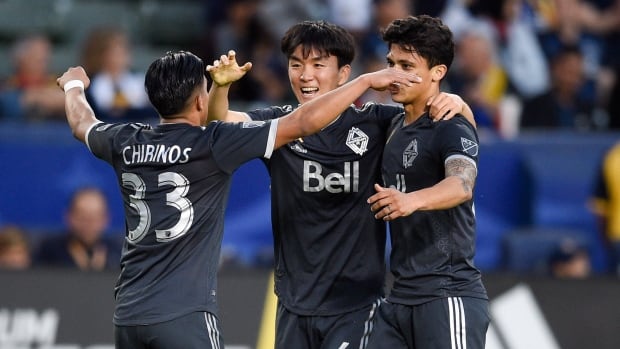 Hwang In-Beom, on the counterattack, patiently approached goalkeeper Matt Lampson before rolling a pass to Chirinos for an empty-netter in the third minute of injury time.

The Galaxy (16-14-3), who had their three-game win streak snapped, fell from second to fourth in the Western Conference standings. Los Angeles has a one-point lead, with one regular-season game to play, over Real Salt Lake for the final home match in the knock-out round of the playoffs.

Doneil Henry gave the Whitecaps (8-15-10) a 1-0 lead when he put away a corner kick by Hwang In-Beom in the 20th minute . Cristian Pavon wrapped a left-footed cross around defender Jasser Khmiri to Zlatan Ibrahimovic who bounced a first-timer from near the spot into the net to tie it in the 23rd.

Watch Michaell Chirinos break away to score the game winning goal in the Whitecaps’ 4-3 victory over Galaxy. 1:12

Theo Bair, a 20-year-old homegrown who signed with the Whitecaps on July 17, scored his second MLS goal to give Vancouver a 2-1 lead in the 41st minute. A shot by Chirinos deflected off Bair, who then side-netted a slow roller with the outside of his foot. Los Angeles tied it again when Uriel Antuna scored in the 58th. Jonathan dos Santos lofted a pass from near midfield to Antuna at the top of the box for the finish.

Tosaint Ricketts gave the Whitecaps the lead again in the 64th minute. Erik Godoy chipped a first-timer from the right side to the top of the 6-yard box where Ricketts put away a header but Chris Pontius made it 3-all in the 86th.