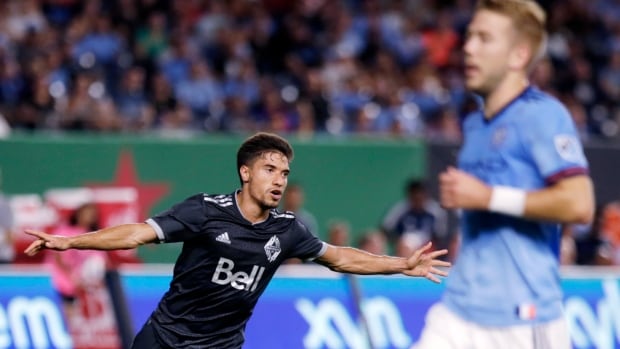 With less than a dozen games remaining, the Vancouver Whitecaps need every point they can get in the chase for a playoff spot in the Western Conference.

So when Erik Hurtado came on to start the second half, he knew there was work to be done.

Hurtado scored in the 87th minute to give the Vancouver Whitecaps a 2-2 tie with New York City FC on Saturday night. Brek Shea sent in a wide cross and Hurtado one-timed it from behind the right side of the 6-yard box into the middle of the net.

The Vancouver Whitecaps and New York City FC played to a 2-2 draw, as Vancouver earned their first-ever point at Yankee Stadium. 1:38

"Honestly, I was just doing my job. It's good to come on the road and get a point. We're fighting for points right now and every point at the end of the season is going to count," said the 27-year-old.

The draw helps the Whitecaps (8-9-6) keep pace in the West, where they sit four points out of the final post-season spot.

Vancouver coach Carl Robinson credited Hurtado for his clutch play off the bench.

"He's been really, really patient throughout this year, he hasn't complained. He's gotten with his business, he's got a super finish and he's put himself right into the shop window now for me," said Robinson.

Nicolas Mezquida opened the scoring for the Whitecaps in the 22nd minute with a low hard shot from behind the penalty arc.

Jesus Medina tied it for NYCFC (13-5-5) in the first minute of first-half stoppage time, stopping Anton Tinnerholm's pass in the area and cutting outside with his second touch to create space for an open shot.

Robinson said he was proud of the Whitecaps' performance.

"The boys are happy. I think when you look at the big picture, I love that group in there — I really love them boys. When they play like that and perform like that and give me absolutely everything — that's the reason," he said.