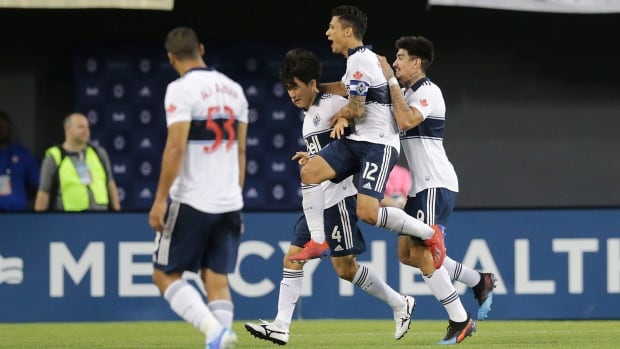 Russell Teibert chased down Ali Adnan’s pass and crossed it through the goalkeeper’s legs to Felipe, who smashed it home from close range.

Hwang In-Beom made it 1-all for the Whitecaps (5-11-9) in the 41st minute, following Kendall Waston’s attempted clearance with a low hard shot from outside the area.

Allan Cruz gave FC Cincinnati (5-17-2) the lead in the sixth minute. Mathieu Deplagne’s cross came off of Darren Mattocks and fell to Cruz who finished from the top of the 6-yard box.

Filipe’s goal in the 84th minute pushed the Vancouver over FC Cincinnati 2-1, and snapped the Whitecaps 9-match winless streak. 1:03

Rapids double up on Impact

Kei Kamara scored the second hat trick of his career and the Colorado Rapids used a flurry of first-half goals to beat the Montreal Impact 6-3.

Kamara gave Colorado (6-12-5) a 2-1 lead in the 36th minute with a penalty kick and made it 3-1 in the first minute of first-half stoppage time. Three minutes later, Diego Rubio scored to make it 4-1 before halftime.

Kamara netted his hat trick with a header to cap the scoring in the 90th minute.

Montreal (11-11-3) cut it to 4-3 with a pair of goals in the second half. Maximiliano Urruti scored in the 55th minute and Saphir Taider converted a penalty in the 76th.

The Impact have lost five of their last six.

Alejandro Romero Gamarra, on the right side, split a pair of defenders and, near the corner of the 6-yard box, played a low cross that deflected off defender Chris Mavinga into the net to give the Red Bulls (10-9-4) the lead in the 55th minute.

A Chris Mavinga own goal spelled the end for TFC in a 2-0 loss to the New York Red Bulls 1:37

Justin Morrow was shown a straight red card in the 89th minute for denying New York’s Bradley Wright-Phillips of an obvious goal scoring opportunity. Lawrence made it 2-0 in the In the first minute of stoppage time. Daniel Royer’s header was parried by goalkeeper Quentin Westburg, but Lawrence volleyed the rebound into an empty net.