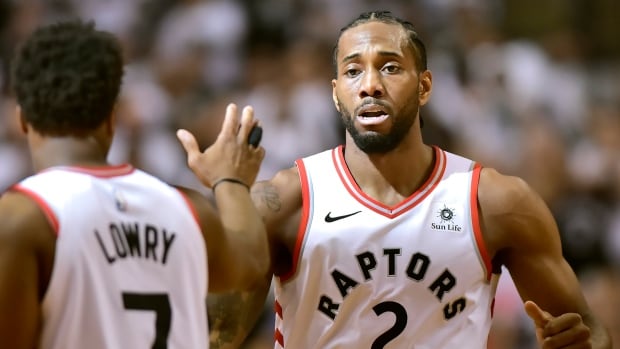 That’s why they brought him here.

It was in the first year of the Toronto Raptors’ playoff streak, in Game 1 against the Brooklyn Nets in 2014, when Paul Pierce uttered that now infamous line.

“That’s why they brought me here!”

The Nets acquired Pierce in a trade with the Boston Celtics the preceding off-season, pushing in all their chips to open their championship window.

Kawhi Leonard poured in a playoff career-high 45 points as the Toronto Raptors opened their 2nd round series with a 108-95 win over the Philadelphia 76ers. 2:12

The Nets would eventually beat the pesky Raptors in Game 7 before being swept by LeBron James’ Miami Heat. But in that moment in Game 1, Pierce condensed the singular goal of the NBA into one outburst.

Kawhi Leonard is much, much less likely to boast after making a big shot. But Game 1 against the Philadelphia 76ers on Saturday, a 108-95 Raptors victory, is why team president Masai Ujiri brought Leonard to Toronto.

Starting with that Game 1 against Brooklyn, the Raptors slowly but surely earned a reputation for regular-season success and playoff follies. Co-stars DeMar DeRozan and Kyle Lowry consistently underachieved, and earned just two victories in 14 attempts against James.

It’s different with Leonard — James even acknowledged it, tweeting out a hand emoji for “The Klaw.”

The quiet superstar embodies all the cliches of a playoff player. He came to Toronto proven in that regard, with a Finals MVP award in his back pocket. But after a year spent in injury wilderness, doubt seeped in.

Leonard, through six playoff games this season, has erased that doubt amid a heap of made jumpers and blocked shots.

Despite his career playoff high 45 points, the play that most stands out from Leonard’s Game 1 was a block. With just under four minutes remaining in the third quarter, the Raptors led 81-70.

Leonard then picked up Tobias Harris at the three-point arc, stalked him to the basket, stuck up his left claw and denied Harris’ runner.

Pascal Siakam was sent the other way for a wide-open dunk. After another missed shot, Leonard drove toward the net, drew a triple-team and kicked out to sharpshooter Danny Green for a three-pointer.

WATCH | Leonard changes the game on both ends in 3rd quarter:

Leonard finished with a post-season career-best 45 points, while Siakam added 29 points as the Toronto Raptors opened the NBA Eastern Conference semifinal with a 108-95 victory over the Philadelphia 76ers. 0:34

Leonard posted the second-highest individual playoff scoring output in Raptors history on Saturday with his 45 points, trailing only Vince Carter’s 50 points against the same 76ers 18 years ago.

But it was a block and an assist that proved Leonard’s playoff prowess.

That’s why they brought him here.