I am certain I have seen this movie before.

It’s a true story – not some far-fetched Hollywood fantasy.

There are no computer-generated special effects. The stunts are real and the screenplay is compelling. The characters have changed and the finally scenes are not yet written, but essentially it is a remake of the 1991 original.

I was fortunate to be a firsthand witness to history. The rags-to-riches tale of Blackburn Rovers – an unfashionable, second tier soccer team that rose to become Champions. In its simplest form, it is a story of passion, money, influence and eventually power.

The key to it all was hiring the right coach.

Kenny Dalglish became the pied piper. Universally respected for his playing and coaching career, Dalglish put Blackburn on the map. His very presence turned heads and persuaded players to follow his lead.

In less than four years, Dalglish took Rovers all the way to the top of the mountain. In 1995, Blackburn became the only club to break the decade long dominance of Manchester United and Arsenal as English champions.

Jealous fans and a London-based media accused the club of buying success. It is true, Dalglish spent the owner’s millions quickly – but he invested in the right character of player to build a championship team.

Let’s not kid ourselves – success in pro sports today simply doesn’t happen without considerable financial backing. Ask fans of Chelsea or Manchester City about that.

An opportunity impossible to ignore

Brian McDermott didn’t need to become head coach of the Toronto Wolfpack. Like Dalglish, he owns a playing and coaching resume few can match.

I believe it was a combination of his love for the game, and the chance to create something new that attracted him. In simple terms, McDermott’s inherent competitive instinct got the better of him.

It was a job he didn’t covet, but by the same token, one he could not ignore.

His task is two fold; succeed in the present, and build for the future. Right now he has a busy time ahead. There are two games in three days over the Easter holiday, and then the relocation to Toronto for the first time.

A third of the way through his first season the signs are encouraging. The Wolfpack has notched eight wins from nine and have a four point lead over its nearest rivals. There is no reason why his players should not continue to lead the chase for Super League.

McDermott has the knowledge and experience to guide their path. He knows what it takes to win championships. He knows what calibre of player is necessary to achieve the goal.

More importantly he has the pulling power to tempt big time players to join the adventure. McDermott has left his comfort zone behind and must now cajole others to take that leap of faith.

Ready to hit the ground running

He has already brought in a considerable amount of new blood. Ricky Leutele is the jewel in the crown. A skillful, powerful centre, Leutele has the experience to quarterback the Wolfpack and turn defence into offence in the blink of an eye.

McDermott knows when the time comes Toronto must be ready for the Super League. For all the disappointment of missing out to the London Broncos in the Million Pound Game last fall, the truth is the Wolfpack was not ready for the next level. Look at the Broncos today – a team struggling to stay afloat in the rarified air of Super League. 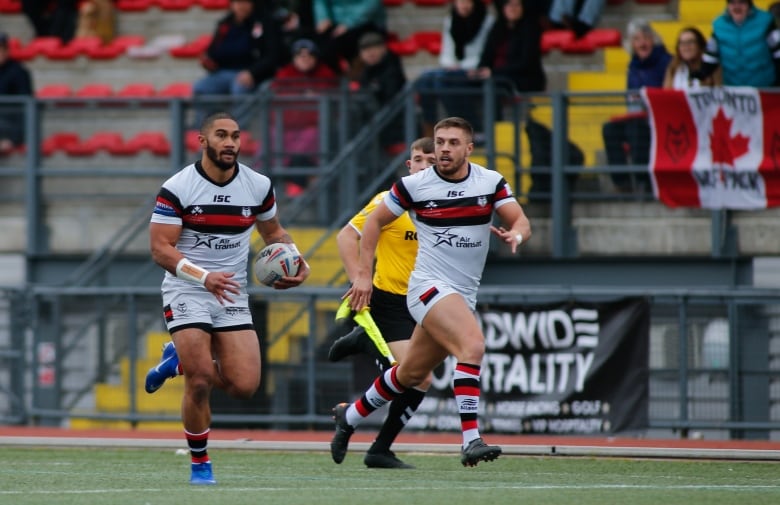 Ricky Leutele, left, makes a break in the Toronto Wolfpack’s game against the Sheffield Eagles on April 6. Leutele was a key addition to the club this season. (Stephen Gaunt/Touchlinepics.com)

The Wolfpack cannot afford to be an also-ran. The Toronto sports market is too crowded and the club is too new not to be successful on and off the field. When fans become apathetic it can only spell trouble. Toronto FC and the Toronto Argos could attest to those concerns.

Back in Europe, rivals are naturally envious of what the club is striving to achieve and the financial muscle at its disposal. Toronto is not trying to change the game – it is attempting to grow the game and make it appealing to a potentially enormous new audience.

The traditionalists won’t like it. They don’t want some upstart team coming in and stealing the limelight. They, too, have seen this movie before. Eventually they will have to accept the remake looks like a box office hit.