For some women living outside Saskatchewan's major cities, giving birth in the care of medical professionals requires travelling hundreds of kilometres in multiple aircraft.

Stephanie Tsannie, a mother from Wollaston Lake, had to take a flight to Prince Albert, over 500 kilometres away, to deliver her son Brier eight years ago.

There are still no doctors in her community, so she expects she'll have to make the same trip this year to have her second child. It's common practice for pregnant women in northern Saskatchewan to be moved to La Ronge, Prince Albert or Saskatoon prior to their due dates so they are there to deliver.

The only deliveries north of La Ronge are emergencies.

I don't feel safe to deliver in my hometown.– Stephanie  Tsannie , mother from Wollaston Lake

"I don't feel safe to deliver in my hometown. We don't have the equipment here at our clinic," Tsannie told CBC. "If it was an emergency delivery, then I'd have no choice, but in my own opinion, I would rather have my child down south, where I'm in a hospital, where they have all the equipment they need to deliver a baby.

"If it's an emergency C-section, then they have a surgery room to deliver the baby." 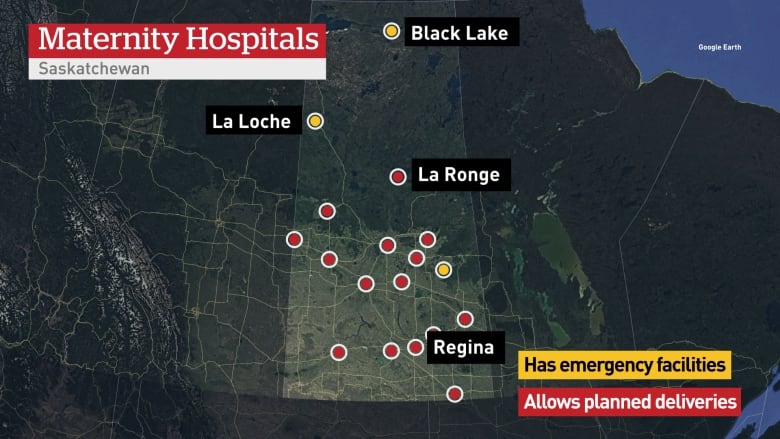 Only recently has the Ministry of Health agreed to cover the cost of one support person to accompany an expectant mother on her journey.

Tsannie said she was scared the first time because she had to go all by herself.

She remained alone in Prince Albert for two weeks until her partner travelled to meet her on his own expense. She had been staying at Spruce Lodge, a medically approved home that provides meals, accommodations
and transportation to registered First Nations clients who come to Prince Albert to access medical services not available in their home community. Tsannie was sharing living quarters with other expectant mothers and people travelling to Prince Albert for medical appointments.

When her partner got to the city, they stayed at his sister's house until she had to go to the hospital.

"I was relieved to finally be in a place where I was familiar with the people and I was more comfortable because I was there with my boyfriend waiting to have our baby," said Tsannie. "It meant the world to me to have him there to experience it and to see what women go through to have their babies.

"He said he was really, really happy that he got to experience watching and being there while I was giving birth."

Flying to and from Prince Albert from the northeast corner of the province required Tsannie to take three connecting flights.

She returned to her community four days after Brier was born, over three weeks after she left home.

"I flew home as soon as there was room on the plane," she said.

Tsannie said Brier is looking forward to becoming a big brother, and talks about her trip to Prince Albert all the time. She has selected an obstetrician in Prince Albert to work with this time around.

Nurse practitioners who fly in to the community to take appointments help maternity patients make those connections, Tsannie said.

Calls for doctors in the North

There are no doctors in Wollaston Lake, but one is flown in every second month.

Tsannie said she wishes there were more health resources in the community, including at least one full-time doctor.

I didn't get to see my oldest be born in front of me.– Dusdy   Besskkaystare , father from Wollaston Lake

It's a sentiment shared by people across Northern Saskatchewan.

Dusdy Besskkaystare​ is a father of two in Wollaston Lake. He was 16 when his first daughter, Desarae, was born, and the province said he was too young to accompany his girlfriend the nearly 900 kilometres to Saskatoon.

"My feelings were demolished," Besskkaystare said. "I didn't get to see my oldest be born in front of me." 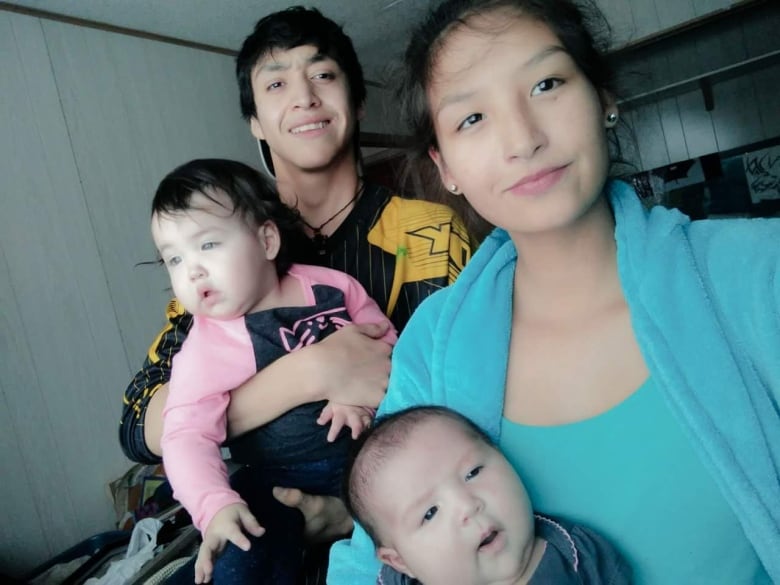 Dusdy Besskkaytsare, a father of two in Wollaston Lake, was 16 when his first daughter, Desarae, was born, and the province said he was too young to accompany his girlfriend Sydney to Saskatoon. They have another daughter, Spencer, 10 months. (Submitted by Georgina Besskkaystare)

Desarae was premature and had to be in an incubator, so her stay in hospital was extended. Five days after she was born, Dusdy was finally able to get a flight south to meet her. He said it cost him over $ 2,000 out of pocket for the flights.

"If there was a hospital here, the moment that I found out my girlfriend's water broke, I'd be right next to her," he said. "I'd run. I would be there in a heartbeat to support her.

"I'll always be there for my girls."

Despite lack of medical care in the North, many women want to give birth at home.

Dr. Veronica McKinney, director of Northern Medical Services at the University of Saskatchewan College of Medicine, said expectant mothers are "voting with their feet."

Child care is an issue for expectant mothers with other children. If they do go, they worry about accommodation, food, language barriers and emotional isolation, said McKinney. 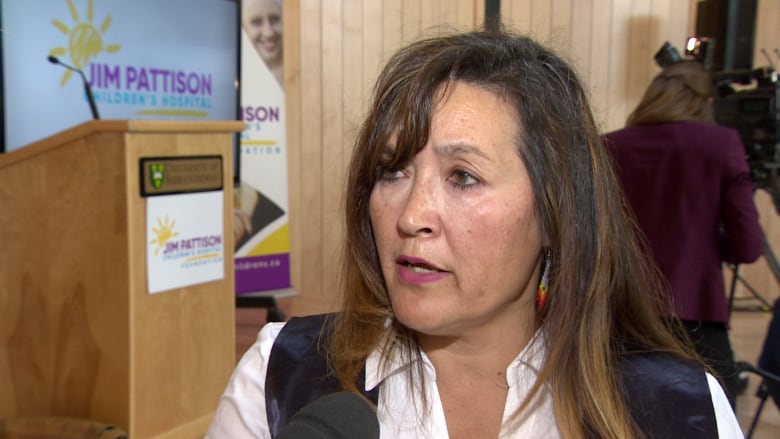 Dr. Veronica McKinney, director of Northern Medical Services at the University of Saskatchewan College of Medicine, said many expectant mothers don't want to leave their home community to give birth. (Radio-Canada)

"I've seen moms get on a bus with babies two days old in the winter. It's awful. Who would choose to do that unless you have to?"

Circle of life not complete

McKinney and Bowen are working on a project that looks at Indigenous women's perspectives for culturally secure birth practices.

I've seen moms get on a bus with babies two days old in the winter.– Angela Bowen, RN and midwife

The women have a chance to tell their stories and share their own concerns.

"Our elders speak about how the circle of life is not complete in many of our communities because they only have deaths, they don't have births in the communities," said McKinney. "So they don't have that balance of happiness and joy with the sadness of the passing of the person."

They think that employing more midwives in Saskatchewan, particularly Indigenous ones, could be one way to address the gap. Currently, there are only 17 in the province and none stationed north of Saskatoon.

"We see such a difference when people are calm and relaxed," said McKinney, who has delivered about 300 babies herself. "There's really good research and evidence to show that when women are supported, they do better and the babies do better."

Since 2009, midwives have participated in the delivery of over 3,200 births in Saskatchewan.

Midwifery-led maternity has been going strong in Fort Qu'Appelle since 2014.

Lorna Breitkreuz, director of client services at All Nations Healing Hospital, said the birth centre serves the predominantly rural and First Nations population in the area.

"It is a challenge for women to access midwifery services and they do travel a far distance," said Breitkreuz. "So the program we provide here makes it a little bit closer for them."

As long as the birth is deemed “low risk,” the woman can come to the centre for all their care without having to go all the way to Regina.

The midwives at All Nations Healing Hospital also provide home visits to mothers within a 180-kilometre radius, including following delivery, so women don't have to travel with their newborns for postnatal appointments.

Breitkreuz said the birthing centre was opened to meet demand in the area.

"Women spoke in the communities and said we want birth back, closer to our communities. They feel that this is part of their community even if they are travelling a little bit."

There is currently a wait list for midwifery care in Saskatchewan. Breitkreuz said there is a need for more trained midwives. 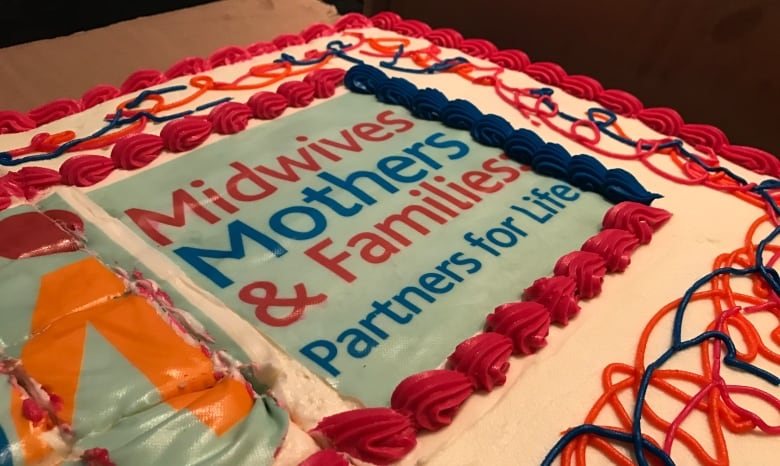 Some people in Saskatchewan say the province needs more midwives. There are none north of Saskatoon. (Kendall Latimer/CBC)

Midwives in Swift Current, Saskatoon and Regina do home births.

According to the Saskatchewan Health Authority (SHA), midwifery care must be able to access an acute care facility equipped to provide labour and birth within a short period of time.

Planning and paying for delivery

More than 15,000 babies are born in Saskatchewan every year.

Almost 75 per cent of the deliveries happen at Royal University Hospital in Saskatoon, Regina General Hospital and Victoria Hospital in Prince Albert.

Only 13 other health centres in the province allow for planned delivery. Some, like La Ronge Health Centre, only facilitate low-risk deliveries.

An SHA spokesperson said a health-care provider works with expectant mothers to design a health-care plan that suits each woman's needs and requirements, including the most suitable delivery location.

Women typically travel by private vehicle or scheduled flight to the community where they will have their baby. In emergency situations, there are air ambulance and ground ambulance services available.