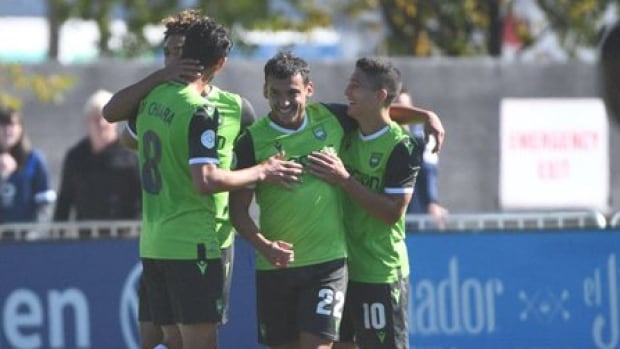 York9 FC took care of business early, scoring a trio of first-half goals to beat FC Edmonton 3-1 on the road on Saturday.

Shaking off their loss from last week, York9 moved into a tie for third place in the Fall season standings with 16 points.

Luca Gasparotto got things started for the visiting Nine Stripes in the eighth minute, after teammate Ryan Telfer lobbed a long-distance free kick into the box. Gasparotto rose above the crowd to put the ball in the net with a header for his first CPL goal.

Just over ten minutes later, Rodrigo Gattas extended York9’s lead, capitalizing on a deflection in the six-yard box to make it 2-0 in the 21st minute.

Shortly after, Telfer found a goal of his own after Simon Adjei spotted him in acres of space on the edge of the box. Telfer took the ball, scoring with a clean finish along the ground to make it 3-0 in the 31st.

The Eddies finally got one back in the second as Easton Ongaro broke FCE’s 335-minute goalless streak, deflecting a long-range shot past Y9 keeper Nathan Ingham in the 65th minute.

Chances came but goals did not for Valour FC or HFX Wanderers FC Saturday afternoon at a jammed-packed Wanderers Grounds in Halifax, with both sides ending proceedings even for the first time over seven tilts this season.

Both clubs combined for 12 shots on goal, many half-chances, but proceedings remained scoreless right to the final whistle.

Valour’s first clear-cut chance came with controversy at Wanderers Grounds after a half-hour of play. Ali Musse, capitalizing on a defensive mishap, went down in the box while attempting to strike the ball, leading to penalty appeals.

Musse’s chance highlighted a scoreless-yet-cagey first half, with the two sides meeting for the final time in 2019.

Valour continued a particularly fruitful day in front of goal in the second frame, cutting through HFX’s midfield line often. Similarly, HFX also enjoyed half-chances at the other end, specifically with Thomasz Skublak, who arrived as a second-half substitute.

A pair of late chances from Marco Bustos, including a speculative late bicycle kick, tipped over the bar by HFX goalkeeper Christian Oxner, marked the final decent chances of the match.

Valour will have a little time off before their next match, as they visit Spruce Meadows to take on Cavalry FC on Oct. 2, while Halifax hosts FC Edmonton on Sept. 28.