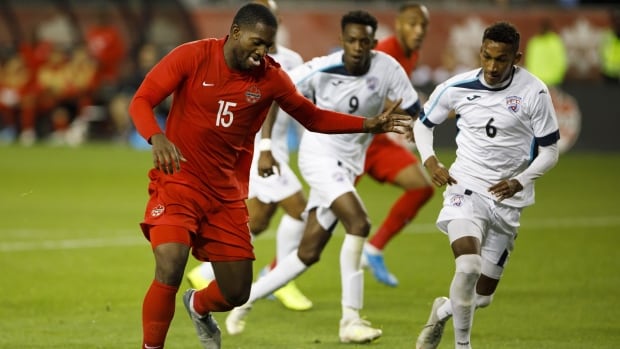 The adventure was about to begin.

The 27-year-old defender from Brampton, Ont., is in uncharted territory for a Canadian, playing for the Suwon Samsung Bluewings in the K-League — one of the first soccer leagues around the world to return to action during the pandemic

“It’s definitely an experience. I am enjoying it … I’m happy,” said Henry, a former member of Toronto FC and the Vancouver Whitecaps.

Henry’s new home is Suwon World Cup Stadium, a 43,959-capacity venue known as Big Bird because the cover on one stand — seen from above — looks like a bird stretching its wings.

Suwon hosts Ulsan Hyundai on Sunday in its second league outing of the season. Ulsan blanked Sangju Sangmu 4-0 in its opener.

Henry started in two AFC Champions League games — a 1-0 home loss to Japan’s Vissel Kobe on Feb. 18 and a 2-1 loss at Malaysia’s Johor Darul Ta’zim FC on March 3 — before the K-League opener March 8.

Suwon, down a man when Australian midfielder Terry Antonis was sent off for a harsh tackle, conceded the goal off an 84-minute corner with 41-year-old Lee Dong-gook beating Henry and other defenders to a header off a corner.

The goal celebration was modest with fist and elbow bumps.

Substitutes, off-field officials and photographers wore masks. The Joenbuk players came out to “We are the Champions” as Bluewing players applauded. A giant message saying .CU Soon Stay Strong was spelled out in one empty stand.

“It was almost like a closed-door training [session],” said Henry.

But while the stadium was empty, the contest was shown around the world via TV and social media feeds.

“Although there weren’t people in the stadium, there were people watching,” said Henry.

“Honestly I was just very hungry and couldn’t wait to get back on the pitch and be playing some meaningful games.”

COVID-19 checks remain strict there. Henry has a fever check the day before and day of a game. Only the 18 players selected for the game are allowed in the stadium with substitutes having to wear masks.

Starting at the heart of the Suwon defence, Henry has been impressed by the level of play in Korea.

“I think that the players are very sharp and technical and very direct. They play very very very fast. That’s something that I’m not used to. I like to slow down the game, taking it in spurts where you can change the tempo of the match. Whereas they are always full out, 100 per cent.”

He says his early take is the K-League is like Major League Soccer but “without some of the DP [designated] players.”

Already Korea is meeting his expectations.

“I want to be valued wherever I play,” Henry said. “I didn’t feel like I was getting that in MLS, so basically it was my time to go. I always had in my head that if anything pops up and I can go back to Europe, I’m gone.

“I just want to go where I’m getting that exposure that I need, because I have a bittersweet taste in my mouth about how everything ended in Europe. Because of lots of injuries, I didn’t get a chance to fully show myself.”

“My vision is still clear when it comes to that kind of stuff.”

Henry was 21 when he signed with West Ham in January 2015 on the recommendation of former TFC manager Ryan Nelsen. The defender had played 70 games for Toronto, with the last matches coming while he was officially on loan from Cyprus’ Apollon Limassol.

He never actually played for the Cypriot side and then-Toronto GM Tim Bezbatchenko took months to announce the mysterious loan deal.

Three surgeries, including a long-term knee injury, in 2 1/2 years delayed Henry’s progress. He saw limited action in Europe with Blackburn Rovers and Denmark’s AC Horsens on loan before joining Vancouver in 2018. He played 39 games for the Whitecaps.

Initially Henry stayed closed to home in Korea because of the pandemic, not wanting to take chances.

“Even though everything was open, it was like you didn’t want to go outside. Especially for myself, for a lot of time I didn’t know where I should go, what I should do.”

He stuck to his routine, knowing where the nearest grocery store was. “I just had two or three places. I wasn’t really exploring.”

But with the situation improving, he has ventured outside more this month — including a visit to Seoul.

While life may be returning to something more normal he says people continue to follow COVID-19 protocols. Masks have been commonplace in Korea for some time, he said.

Seoul closed bars and clubs after another outbreak of the virus. But Henry says most everything is open.

Antonis and fellow Australian Adam Taggert have helped ease his transition with the Bluewings.

“Everything’s been class. Everybody’s been good. The club’s been really good, taking care of us,” said Henry.