Optimism was the word of the day — it’s been one of Canadian Football League Commissioner Randy Ambrosie’s favourite words during his tenure at the helm of the league.

And for the first two years there was a lot to be optimistic about. What a difference a year has made.

While the CFL is doing its best to generate a level of excitement to begin what would have been the start of Grey Cup Week in Regina, there’s no question a dark cloud is still hanging over the league after failing to take to the field in 2020.

For the first time since 1919 the Grey Cup will not be awarded after the league officially cancelled the season in August.

On Monday, Ambrosie held his annual state of the league address — obviously in a very different fashion. For nearly 30 minutes the commissioner fielded vetted fan questions in a virtual Q and A.

Most notably, Ambrosie revealed planning is well underway on a 2021 schedule.

“There’s good reason to be optimistic that our players will be back on the field in 2021,” he said. “We’re going to publish a schedule very soon.”

WATCH | CFL’s Ambrosie calls for optimism ahead of potential 2021 season: 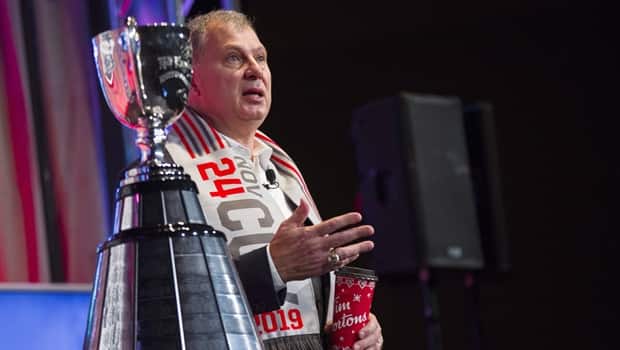 In his annual State of the League address, CFL Commissioner Randy Ambrosie says “there’s good reason to be optimistic that our players will be back on the field in 2021.” 2:01

How the league gets back to playing next year was a question asked repeatedly by fans in several different ways. From gate revenue to the business model to global expansion and even American expansion, fans were hoping to get a sense of a concrete plan on how the CFL is going to make it back to the stadiums.

Though no concrete plan was presented, Ambrosie did talk about the optimism he felt with Monday’s announcement of a second vaccine. It appears as though the CFL’s plan to return is pinned on there being a vaccine.

There’s no question this is a league that needs fans in seats and bleachers come next season to survive, something Ambrosie acknowledged.

“The single biggest, best solution for the CFL in respect to our plan is to get our fans back in the stands,” he said. “That is the single best thing that could happen to this league.”

During this same address last year from Ambrosie, the tone couldn’t have been more different.

During the celebrations in Calgary (including Tuffy the horse making a hotel lobby appearance) Ambrosie was brimming with confidence and excitement as he looked toward a bigger, bolder and brighter future of the league.

“I won’t ever apologize for thinking big for this league. I’ve always thought we’ve punched below our weight. We have to think bigger, and we will,” Ambrosie told CBC Sports just days before the 2019 Grey Cup. “It is time for some good old-fashioned CFL swagger.”

That swagger is all but gone now as the league tries to find a way back to the field in 2021.

WATCH | A deeper look into the cancelled 2020 CFL season:

Between other leagues starting up again and the CFL’s livelihood depending on ticket sales, Devin Heroux explains the ramifications of the lost season. 12:05

In a very short amount of time Ambrosie’s tune has changed, including asking for up to $ 150 million from the government earlier this year.

He said Monday, talks are still ongoing with the government.

There’s a lot of ground and money to make up for a league that one year ago was eyeing Halifax and global expansion and is now just trying to find a way to get back on the field for next season.

“We did get knocked down but like great football players we’re going to get right back up and look forward to the next play,” Ambrosie said.

“Hard at work and optimistic.”