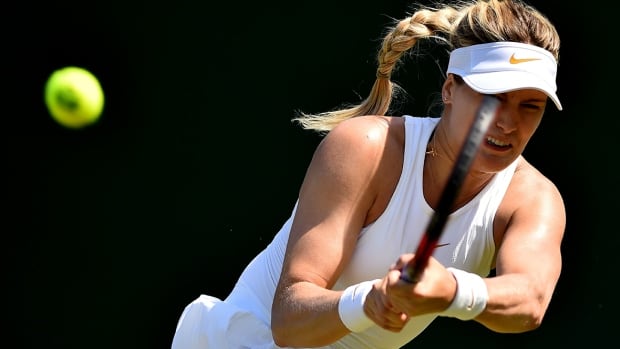 Eugenie Bouchard is into the second round at Wimbledon.

A finalist at Wimbledon in 2014, Bouchard was forced into qualification after seeing her ranking tumble to No. 191 before the tournament. The 24-year-old is now ranked 188th. Taylor is No. 180.

Bouchard returned to Grand Slam main draw action at Wimbledon after failing to qualify for the French Open. The win was just her second in the past four years in the main draw at Wimbledon.

Bouchard will face No. 17 seed Ashleigh Barty in the second round. The Australian beat Stefanie Voegele of Switzerland 7-5, 6-3 on Tuesday.

Meanwhile, Vasek Pospisil of Vancouver lost 6-4, 3-6, 6-2, 6-3 to Mikhail Kukushkin of Kazakhstan in a first-round men's match on Tuesday. Kukushkin is ranked 77th, 20 spots ahead of Pospisil, who has lost his past five first-round matches at Grand Slams.

Denis Shapovalov of Richmond Hill, Ont., the No. 26 seed, was scheduled to face Jeremy Chardy of France later Tuesday.

Milos Raonic of Thornhill, Ont., is expected to play his second-round match on Wednesday.