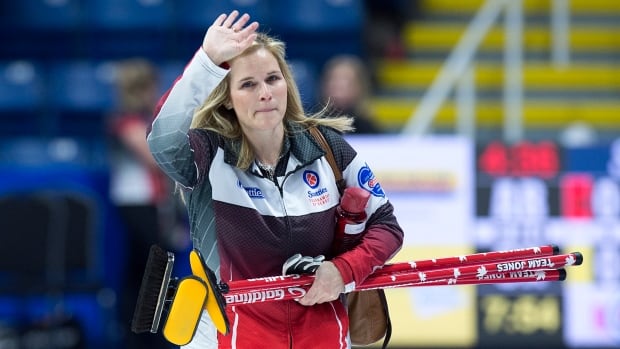 Jennifer Jones says it was one of the most emotional moments of her illustrious curling career — a confluence of events seemingly fated to coincide with one another.

Jones’ rink had won the 2018 Scotties in dominant fashion, losing just two times all tournament. It was her sixth championship, tying Colleen Jones for the national record.

Accolades followed at the 2019 event in Calgary. A Jones victory vaulted her into second all-time on the Tournament of Hearts wins list. She currently sits at 200.

Then, a TSN panel of broadcasters, reporters and top curlers voted the Winnipeg native the greatest Canadian women’s curler of all time. Jones remembers celebrating the moment with her parents at their AirBnB in Calgary.

It would be the last time Jones’ father, Larry, watched her curl in person.

“I remember coming back to where they were staying and he said to me, ‘you’re pretty good at curling, eh?'” Jones told CBC Sports’ Anastasia Bucsis on the Player’s Own Voice podcast on Tuesday. “‘Not bad, dad.’ And that’s one of the last memories I have with my dad, so I’ll always remember that day for the rest of my life.”

Larry Jones died May 21, 2019 at 80 years old. Jennifer says it was her father who first put her on the ice and taught her about curling.

It is with profound sadness that I say good-bye to my amazing Dad. Dad you taught us all to live life better, to love more and to laugh often. Thank you for always being there for us…always. I am so proud to be your daughter. I will love you always and miss you forever. ❤️ <a href=”https://t.co/Ln3UG2sUJr”>pic.twitter.com/Ln3UG2sUJr</a>

“He’s the one who had this love of curling that was infectious in all my family and who, I think, he lived vicariously through me every time I played,” Jones said.

Jones, 45, also won Olympic gold at the 2014 Games in Sochi. She said she grew up a shy kid, but found solace on the ice.

“I loved the smell of the ice. I loved the feeling I had when I was out there. I felt like I was safe and I was at home and that’s why I played,” Jones said.

Thus, the Canadian women’s curling GOAT moniker carries with it a hint of irony.

“I started curling because I love to play and it was an outlet for me and then all of a sudden to be recognized as one of the greatest of all time, it’s crazy. It’s mind boggling to me,” Jones said.

Striving to be the best

For Jones, the moment and the title were too difficult to reconcile then. In fact, she says that may not ever happen.

Jones is married to fellow pro curler Brent Laing. The couple plays mixed doubles together. They have two kids – Isabella, 7, and Skyla, 3. It was Isabella who hammered home to her mother what that TSN poll truly meant.

Isabella heard the news, and asked in the simplest terms: “Mom, are you one of the best ever out of everybody?” Mom replied that yes, that’s what they voted on.

“Well I wanna be the best at something one day, mom,” Isabella responded.

Jones and Team Manitoba beat Team Wild Card in extra ends to win the 2018 Scotties Championship in Penticton, BC. 1:27

The elder Jones said that was all the perspective she needed.

“So I see how we can be role models and mentors for our kids and if in some small way that helps her achieve one of her dreams, then it’s almost like another dream come true for me,” Jones said.

For Larry Jones and Jennifer Jones and now Isabella Jones, curling is a family affair.

And so for Larry to be there for Jennifer to accept the title as the greatest Canadian women’s curler and for Isabella to acknowledge the true meaning of that bestowment, of course the Olympic gold medallist would be emotional.

“For [dad], it was just watching his daughter doing what she loved to do. And then when he reflected sometimes he’d shake his head and say ‘I can’t believe all that you’ve accomplished,'” Jones said.

“So I think for him it was just like any parent just seeing your kids happy and seeing their dreams come true.”