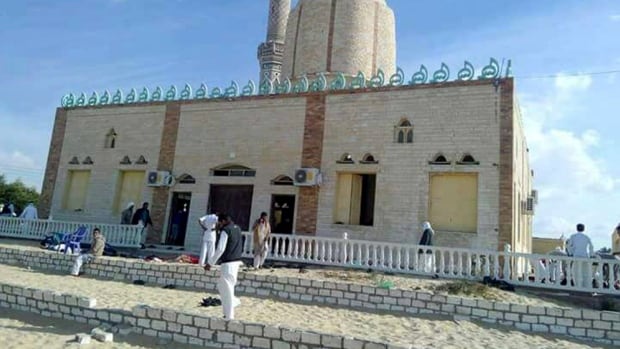 Militants bombed a Sufi mosque and fired on worshippers in the volatile Sinai Peninsula during Friday prayers, Egyptian officials said, killing at least 155 people in what appeared to be the latest attack by the area’s affiliate of ISIS.

The extremists attacked the al-Rawdah mosque in the town of Bir al-Abd, 40 kilometres from the North Sinai provincial capital of el-Arish, opening fire from four off-road vehicles on worshippers inside during the sermon, three police officers said.

Victims were being transferred to local hospitals, they added, speaking on condition of anonymity because they weren’t authorized to brief reporters. They said the ISIS militants had blocked escape routes from the area by blowing up cars and leaving the burning wrecks blocking the roads.

Largest attack of its kind

The attack was the largest single targeting of Egyptian civilians and the first on a large mosque congregation since the Islamic State in Iraq and Syria affiliate began its campaign of violence against the state following the military’s 2013 overthrow of an elected but divisive Islamist president.

An attack Friday on a mosque in Bir al-Abd in Egypt’s North Sinai region has left dozens dead, according to state media.(Curious Maps)

Security forces have been battling militants in northern Sinai for years, but attacks to date have focused on military and police assets, although assassinations of individuals ISIS considers government spies or religious heretics are not uncommon.

Attacks on the rise

Hundreds of soldiers and militants have been killed in the conflict, although exact numbers are unclear as journalists and independent investigators are banned from the area.

Egypt is also facing a growing number of attacks by militants in its Western Desert, including an attack last month that killed 16 police, according to an official tally issued by the Interior Ministry. Security officials have told journalists that dozens more, including high-ranking counterterrorism officers, perished in the Oct. 20 attack some 135 kilometres southwest of the capital, Cairo.