Hours later, Health Minister Christine Elliott battled back at her own news conference, accusing the NDP of "fear-mongering." Elliott also said the material was non-partisan public service documents that she had never seen.

The unnamed bureaucrat allegedly responsible for the document breach has been fired, and the Ontario Provincial Police have been called in to probe the case.

The NDP is accusing the PCs of plotting to privatize healthcare, but the governing party says that's not the case 1:41

But the NDP says the "internal government documents" released on Monday appear to be government presentations, and include references to cabinet approving the plan and appointing board members.

"It's a done deal," Horwath said. "But the entire Ford government has been hiding this plan from the public. Why? Because people won't like it."

CBC Toronto has learned that the public servant behind the "unauthorized disclosure of confidential government documents" has been fired. The OPP has been notified of the breach, said Steven Davidson, the head of the Ontario Public Service.

Christo Aivalis, a Queen's University labour studies professor, said while government documents are routinely leaked, the sources of those leaks are rarely fired or prosecuted. He said he believes the PC government is putting pressure on bureaucrats to crack down on leaking.

"I think that it's being done here, because the dirt that's been dug up — for lack of a better term — has real meaning to it, and the government is probably mad the people have found out the nature of their actions," Aivalis said.

"I think they're acting to prevent further leaks of credible information in the future, and that's why they've taken this step." 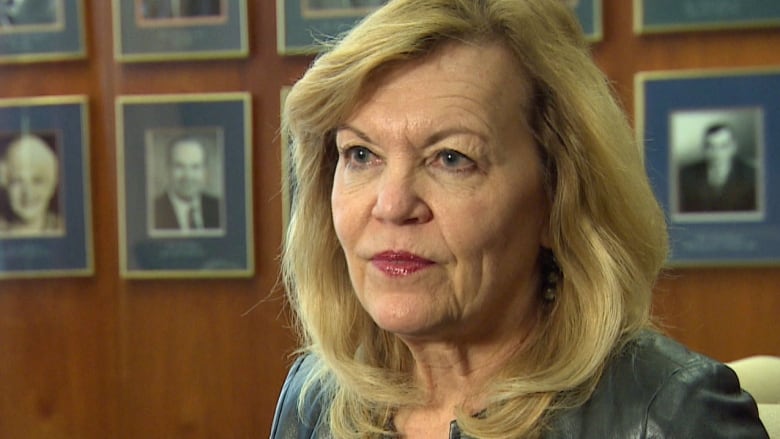 Horwath said the changes would give the PC government "unprecedented power to farm out" services to private sector entities.

The NDP also says the documents introduce a new model of care delivery, called MyCare groups, which would outsource services such as laboratories, many of which are already privately run, and the province's air ambulance service. 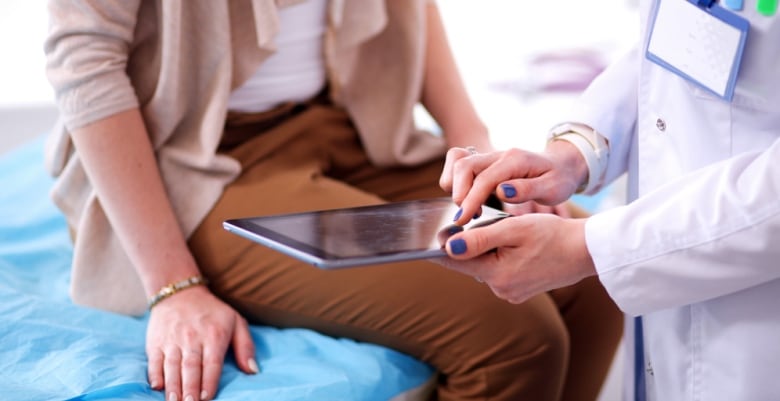 The NDP leader said the contracts would be won through a bid system, which will have "expression of interest" due in March, if the legislation were approved.

No skipping the line

Elliott said the government has no plans to create for pay services and says people with money will never be able to "skip the line" when it comes to health-care services.

"We will not be privatizing any of the services referenced today by Andrea Horwath," Elliott said. "In fact, the document that she released today was an internal non-partisan public service document which I have never seen."

Elliott went on to say, her government is bringing "desperately needed and overdue changes" Ontario's health system at a later date.

Last week, the NDP released a draft version of upcoming PC health-care legislation, which would dissolve the province's Local Health Integration Networks (LHIN) and create a "super agency" to oversee the health system.

The NDP received all the documents last week, but only released the draft legislation last week and held onto the internal government documents over the weekend.

"I think it was important for our staff to take as much due diligence as possible," Horwath said, defending her decision to withhold some details last week," she said.

"We do not have anything else to share with you on this subject, and who knows, we all know how this works, today is today, tomorrow is tomorrow and next week is next week." U.S. President Donald Trump, on his first day on the Korean peninsula, signalled a willingness to negotiate with North Korea to end its nuclear weapons program, urging Pyongyang to “come to the table” and “make a deal.”

In a notable shift from his aggressive rhetoric toward North Korea, Trump took a more optimistic tone Tuesday, suggesting that “ultimately, it’ll all work out.” And while he said the United States would use military force if needed, he expressed his strongest inclination yet to deal with rising tensions with Pyongyang through diplomacy.

“It makes sense for North Korea to come to the table and make a deal that is good for the people of North Korea and for the world,” Trump said during a news conference alongside South Korean president Moon Jae-in. “I do see certain movement.”

Trump said he’s seen “a lot of progress” in dealing with North Korea, though he stopped short of saying whether he wanted direct diplomatic talks.

Trump tones it down

Trump also underlined the United States’ military options, noting that three aircraft carrier groups and a nuclear submarine had been deployed to the region. But he said “we hope to God we never have to use” the military options.

During his first day in South Korea, Trump lowered the temperature on his previously incendiary language about North Korea. There were no threats of unleashing “fire and fury” on the North, as Trump previously warned, nor did the president revive his derisive nickname for North Korean dictator Kim Jong-un, “Little Rocket Man.” 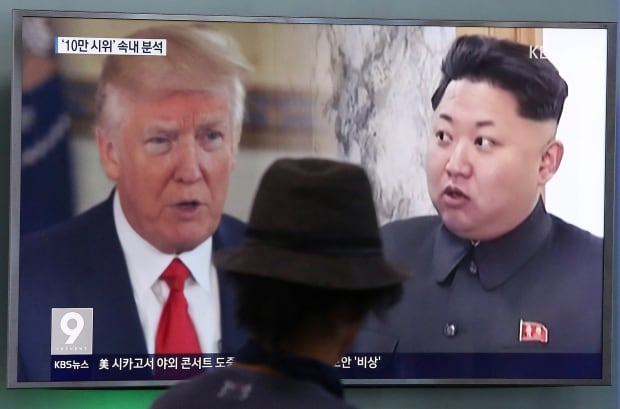 But he did decree that the dictator is “threatening millions and millions of lives, so needlessly” and highlighted one of the central missions of his first lengthy Asia trip: to enlist many nations in the region, including China and Russia, to cut off Pyongyang’s economic lifeblood and pressure it into giving up its nuclear program.

Moon, who has been eager to solidify a friendship with Trump, said he hoped the president’s visit would be a moment of reflection in the stand-off with North Korea and said the two leaders had “agreed to resolve the North Korea nuclear issue in a peaceful manner” that would “bring permanent peace” to the peninsula.

“I know that you have put this issue at the top of your security agenda,” said Moon. “So I hope that your visit to Korea and to the Asia Pacific region will serve as an opportunity to relieve some of the anxiety that the Korean people have due to North Korea’s provocations and also serve as a turning point in resolving the North Korean nuclear issue.”

Protesters of all stripes

Hundreds of South Koreans took to the streets of Seoul for two separate demonstrations timed for Trump’s visit, one to show support and the other to voice disapproval of the U.S. leader amid concerns over North Korea’s nuclear threats.

Surrounded by thousands of police officers and a tight perimeter created by buses, hundreds of anti-Trump protesters rallied at a boulevard near the U.S. Embassy, holding banners that read “No Trump” and “No War.”

“We oppose the visit to South Korea by Trump, who has heightened the fears of war on the Korean Peninsula,” said one of the protesters, reading from a statement.

The group, which calls itself the “No Trump Coalition,” also plans to protest on Wednesday near Seoul’s parliament, where Trump is to make a speech calling on the international community to maximize pressure on North Korea.

Across the street, hundreds of Trump supporters waved the U.S. and South Korean flags and held signs that read “Blood Allies Korea + US.” They chanted “USA!” when Trump’s motorcade passed by the two protest groups for a meeting with Moon at the presidential Blue House. 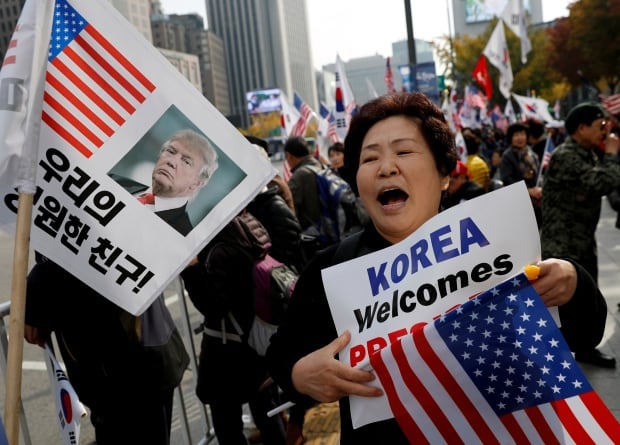 Supporters of Trump take part in a rally in central Seoul on Tuesday. (Kim Kyung-Hoon/Reuters)

More than 15,000 officers will be deployed to provide security during Trump’s two-day visit and they will monitor the demonstrations, according to the National Police Agency.

Police had unsuccessfully attempted to block anti-Trump protesters from marching in streets near the presidential palace, with the Seoul Administrative Court ruling that such a ban would infringe on the protesters’ freedom of assembly. 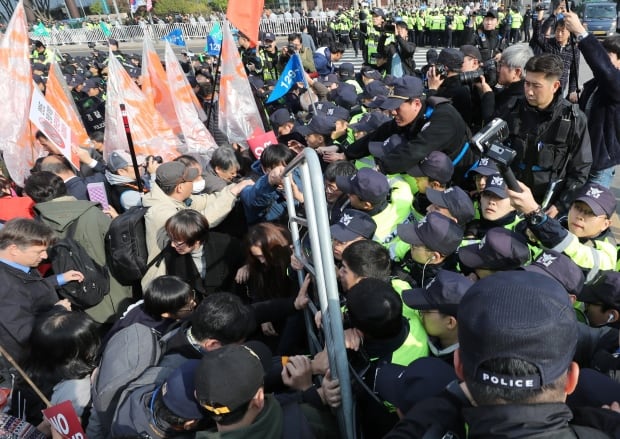 Protesters struggle with police officers during a rally to oppose the visit by U.S. President Donald Trump in Seoul. (Han Jong-chan/Yonhap via AP)

Trump began the second stop on his Asia tour with a visit to Camp Humphreys, a joint U.S.-Korean military base, but even as he walked among the weapons of war, he struck a hopeful note, saying: “it always works out.”

Much like he did in his visit to Japan, Trump indicated he would place the interlocking issues of security and trade at the heart of his visit. He praised South Korea for significant purchases of American military equipment and urged the two nations to have a more equitable trade relationship. Moon said the two agreed on lifting the warhead payload limits on South Korean ballistic missiles and co-operating on strengthening South Korea’s defence capabilities through the acquisition or development of advanced weapons systems.

Trump also pushed his economic agenda, saying that the current U.S.-Korea trade agreement was “not successful and not very good for the United States.” But he said that he had a “terrific” meeting scheduled on trade, adding, “hopefully that’ll start working out and working out so that we create lots of jobs in the United States, which is one of the very important reasons I’m here.”

Burden-sharing is a theme Trump has stressed ever since his presidential campaign.

Trump has not ruled out a military strike and backed up his strong words about North Korea by sending a budget request to Capitol Hill on Monday for $ 4 billion to support “additional efforts to detect, defeat, and defend against any North Korean use of ballistic missiles against the United States, its deployed forces, allies, or partners.”