Wimbledon champion Simona Halep has tested positive for COVID-19 and said Saturday she is “recovering well from mild symptoms.”

The 29-year-old Halep, currently ranked No. 2 in the world, had skipped the U.S. Open due to fears of catching the coronavirus. She said in August that she preferred to stay and train in Europe.

“I wanted to let you know that I tested positive for COVID-19. I am self-isolating at home and am recovering well from mild symptoms. I feel good … we will get through this together,” Halep said on Twitter.

Halep, a former top-ranked player, won Wimbledon in 2019 and the French Open in 2018. Wimbledon was cancelled this year because of the pandemic.

Many European countries are experiencing surging numbers of COVID-19 infections. A new wave of lockdowns swept across France, Germany and other places in Europe this week.

Countries such as Switzerland, Italy, Bulgaria Greece have closed or otherwise clamped down again on nightspots and imposed other restrictions such as curfews and mandatory mask-wearing.

In August, Halep expressed concern about travelling to New York for the U.S. Open. 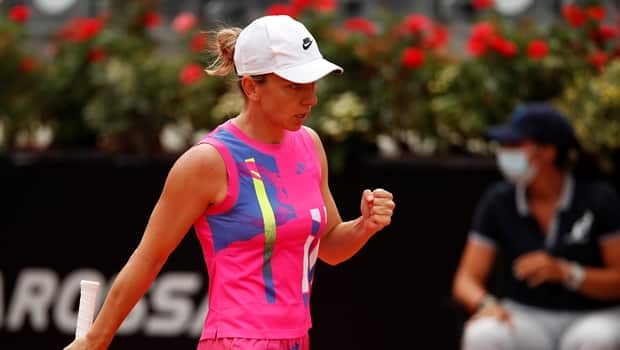 Dominant much of the season against tennis’ elite, Canada’s Bianca Andreescu dropped her second straight match against such an opponent in her opening match at the WTA Finals on Monday as fifth-ranked Simona Halep prevailed 3-6, 7-6(6), 6-3 in Shenzhen, China.

Andreescu, the world No. 4 ahead of her debut at the season-ending tournament, was coming off a quarter-final loss to Naomi Osaka at the China Open in Beijing earlier this month and sports a 9-2 record versus top-10 players in 2019 and 48-6 overall.

A weary-looking Andreescu,who has won 17 of her last 19 main draw matches, took to the court for the third set and needed to have her lower back assessed by a trainer with Halep holding a 3-2 advantage.

Andreescu closed to within 4-3 on a crosscourt forehand return winner but Halep wore her down with each shot of long rallies, broke Andreescu to go up 5-3 and held on serve to win in two hours 35 minutes.

“It was a very tough match,” Halep said. “I knew that she’s a great player and she’s playing till the end without giving up. I had to fight.”

Andreescu was sidelined for months with a right shoulder problem earlier this season before returning in August to beat Serena Williams at the Rogers Cup in Toronto, where the Canadian was hampered by a groin injury. In July 2018, Andreescu dealt with a back issue at the Granby Challenger event in Quebec.

The youngest player in the field in Shenzhen, the 19-year-old Andreescu had a chance to put away Halep in straight sets leading 6-5 in the second set, but brilliant defence by the 28-year-old Romanian and a backhand down the line forced a tiebreaker.

A resilient Andreescu used a huge forehand winner to even the tiebreaker 3-3 after being down 3-0, but Halep’s ability to return several defensive shots was the difference.

Andreescu excelled during the opening set, save for a two-game stretch, as the Mississauga, Ont.-born player also of Romanian descent changed the pace of play while mixing in high balls and drop shot to go with a devastating forehand.

The WTA Finals, which features the top-eight players in the woman’s game, is split into two groups and follows a round-robin format. Andreescu is in the purple group with No. 2 seed Karolina Pliskova of the Czech Republic, No. 8 Elina Svitolina of Ukraine and Halep. The red group is comprised of Australia’s Ash Barty, Belinda Bencic of Switzerland, Czech Petra Kvitova and Osaka.

The top two in each group advance to the semifinals.

Andreescu is attempting to complete a sensational season with a fourth title following victories at Indian Wells, the Rogers Cup and U.S. Open in New York, where she defeated 23-time Grand Slam champion Serena Williams in early September to become the first Canadian to win a Grand Slam singles title.

The loss to Osaka was Andreescu’s first on the Tour in six months not counting withdrawals and retirements and halted a 17-match win streak that saw the resident of Thornhill, Ont., soar up the WTA rankings. Her current ranking is the best ever by a Canadian woman and she has a chance to top the No. 3 ranking Milos Raonic achieved on the men’s tour.

Andreescu is the first Canadian to play in the WTA Finals since Eugenie Bouchard in 2014.

Svitolina, the defending champion, stretched her unbeaten run at the WTA Finals into a new year, beating Pliskova 7-6 (12), 6-4 in her opening match Monday.

Svitolina, the only player in this year’s field who has not won a title this season, was unbeaten in the tournament last year.

After exchanging service breaks in the first set, Svitolina converted her seventh set point. Pliskova also had a chance to take the first set, but she failed to take advantage of a set point at 9-8 in the tiebreaker.

Svitolina then jumped ahead 2-0 in the second set and then broke again for a 4-3 lead.

The victory gives Svitolina a 1-0 record in the Purple Group, while Pliskova is 0-1. 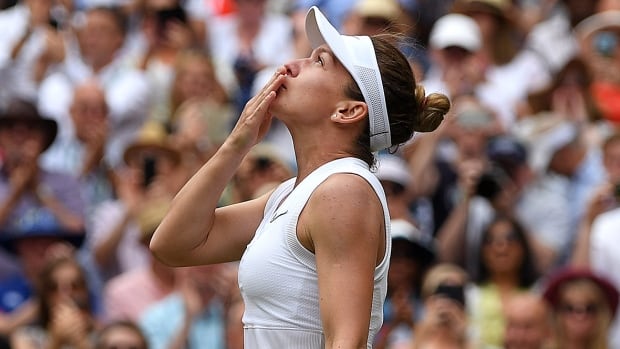 Clutching her trophy 20 minutes after becoming Wimbledon’s champion, Simona Halep checked out the board inside Centre Court that lists tournament winners. Below all of the mentions of Serena Williams, her opponent in Saturday’s final, there already was inscribed: “Miss S. Halep.”

Halep was not concerned with preventing Williams from winning a 24th Grand Slam title. All Halep cared about was winning her first at the All England Club. And she played pretty much perfectly.

On top of her game right from start to finish, Halep overwhelmed Williams 6-2, 6-2 in stunning fashion for her second major championship. The whole thing took less than an hour as Williams lost her third Slam final in a row as she tries to equal Margaret Court’s record for most major trophies in tennis history.

The No. 7-seeded Romanian made a mere three unforced errors, a remarkably low total and 23 fewer than Williams.

Not bad for someone who has been frank about how jittery she has gotten in past big matches and began the day having lost nine of 10 matchups against Williams. But after losing each of her first three major finals, Halep now has won two straight, including at last year’s French Open.

“She literally played out of her mind. Congratulations, Simona,” Williams said during the trophy ceremony. “It was a little bit ‘a deer in the headlights’ for me.”

Williams also lost in straight sets against Angelique Kerber in the Wimbledon final a year ago, and against Naomi Osaka at the U.S. Open last September.

“I just have to figure out a way to win a final,” Williams said.

The 37-year-old American hasn’t won a tournament since the 2017 Australian Open, when she set the professional-era record of 23 Grand Slam championships (Court won 13 of her titles against amateur competition).

Williams was pregnant when she won in Australia and then took more than a year off the tour; her daughter, Olympia, was born in September 2017.

Since returning to tennis, Williams has dealt with injuries but still managed to remain among the game’s elite. In part because of a bad left knee, she only had played 12 matches all season until Wimbledon.

Halep keeps focus on herself

Didn’t take long on Saturday for the 27-year-old Halep to demonstrate this was not going to be easy for Williams.

Not by any means.

Showing off the talents and traits that once lifted her to No. 1 in the rankings, Halep never really gave Williams a chance to get into the match.

“I’ve always been intimidated a little bit when I faced Serena. She’s an inspiration for everyone and the model for everyone,” Halep said. “Today, I decided before the match that I’m going to focus on myself and on the final of [a] Grand Slam, not on her. That’s why I was able to play my best, to be relaxed, and to be able to be positive and confident against her.”

Halep tracked down everything, as is her wont. She didn’t merely play defence, though, managing to go from retrieving an apparent point-ending stroke by Williams to lashing a winner of her own in a blink.

“I was over-hitting it, trying to go for too much,” Williams said. “She was getting just a tremendous amount of balls back.”

Her returns were exceptional, repeatedly getting back serves that left Williams’ racket at 115 mph or more.

On this cloudy, cool afternoon, with the temperature in the low 70s (low 20s Celsius), Halep began with a pair of service breaks and even delivered the match’s first ace, at 106 mph, which put her out front 4-0 after 11 astonishing minutes.

Halep won 14 of the first 18 points, with many in the crowd roaring for each of the rare ones that went Williams’ way. Halep produced eight winners before a single unforced error, avoiding a miscue until the seventh game.

Williams, in stark contrast, came out looking a bit tight, short-arming shots and accumulating nine unforced errors before conjuring up a single winner. She spoke after her semifinal victory about trying to remain calm on court, and that she did, even in the face of a player who was at her very best.

Williams would place a hand on her hip. Or put a palm up and look at her guest box, as if thinking, “What can I do?” Williams’ greatest show of emotion came after she stretched for a forehand volley winner on the second set’s second point. She leaned forward and yelled, “Come on!”

But the comeback never came. Halep broke to lead 3-2 in that set when Williams pushed a backhand long, and there wasn’t much left from there.

Halep only had been as far as the semifinals once at Wimbledon until now. But she was determined to change that and said she told the locker-room attendants at the beginning of the tournament she wanted to grab a title to earn lifetime membership in the All England Club.

“So here I am,” she said Saturday, the fortnight done, her trophy won. “It was one of my motivations before this tournament. So now I am happy.”

The women’s match pitting Hsieh Su-wei and Barbora Strycova against Gabriela Dabrowski of Ottawa and Xu Yifan will be played Sunday instead.

That was scheduled to follow the men’s doubles final on Centre Court. But that match — Juan-Sebastian Caval and Robert Farah against Nicolas Mahut and Edouard Roger-Vasselin — was already past the four-hour mark when it headed to a fifth set after four tiebreakers.

Darkness was approaching, so the retractable roof at Centre Court was closed, further delaying things.