Pierre Kompany's grandfather worked for a diamond company in the Kasai region of the former Belgian Congo in the early 1900s, collecting money from local villages in a job that would give the family its name.

"He would collect payments from all the shops in the village that sold European products," Kompany said.

"At the end of the month, people were saying, 'Company is coming.' And … the name stuck. He was Mr. Company."

More than a century later, at the age of 71, Mr. Company's grandson has just been sworn in as Belgium's first-ever black mayor.

A former refugee from Congo who arrived in Belgium in the 1970s to work as a taxi driver, Pierre Kompany was elected mayor of Ganshoren, a community of 20,000 people northwest of Brussels.

Despite his historic accomplishment, Kompany is actually much less famous than his soccer-playing son, Vincent, the current captain of the Manchester City club and a former captain of Belgium's national team.

But Kompany's election is, indeed, a milestone in a country accused of allowing racism to fester by wilfully forgetting its colonial past.

Millions of Congolese died under the rule of Belgium's King Leopold II, who ran the Congo Free State as a private enterprise in a brutal drive to exploit natural resources at the turn of the 20th century.

"You have a lot of people in Belgium [who] don't know what happened there," Kompany said.

It is not a required subject on the school curriculum. And when it is taught, it is often a sanitized version.

The Royal Museum for Central Africa just outside Brussels has long been accused of complicity in perpetuating that distorted history.

Now housed in one of Leopold's Versailles-like palaces, its roots date back to 1897, when the king built a special tramline so people visiting the World Fair in Brussels could also visit his own exhibition showcasing his colonial exploits.

He even built a "human zoo" of grass huts inhabited by 267 Congolese brought over to be a part of the display. 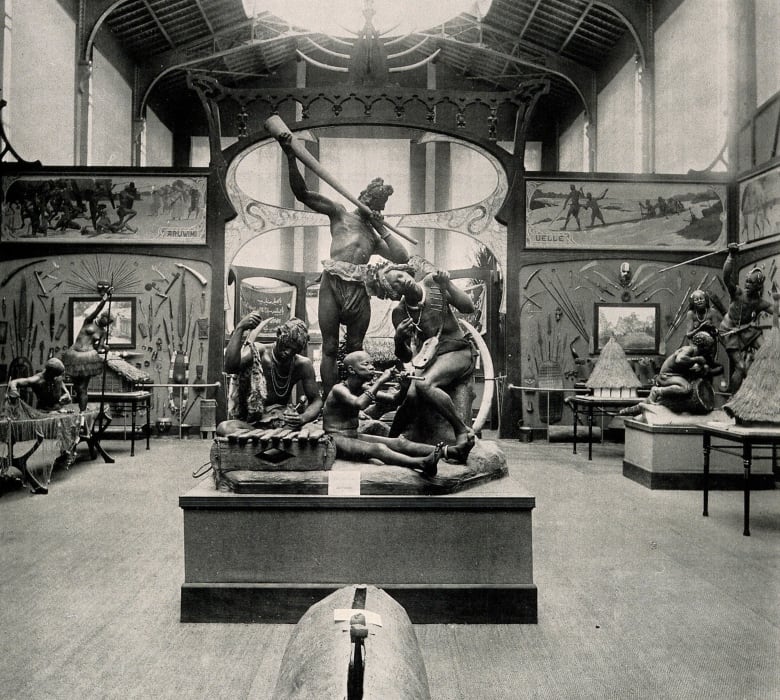 There is perhaps no greater symbol of Belgium's failure to address the dark chapters of its past than the museum, which has maintained its colonialist perspective for all these decades.

"We have one gallery, for example, with the names of the 1,600 Belgians that died between 1876 and early 20th century in the Congo Free State," director Guido Gryseels said.

"There's not a single mention about the many Congolese victims of colonization."

Gryseels is the man behind a five-year renovation that he insists will "decolonize" the museum in form and message, delivering a more honest narrative to the Belgian public, which got its first look this past weekend. 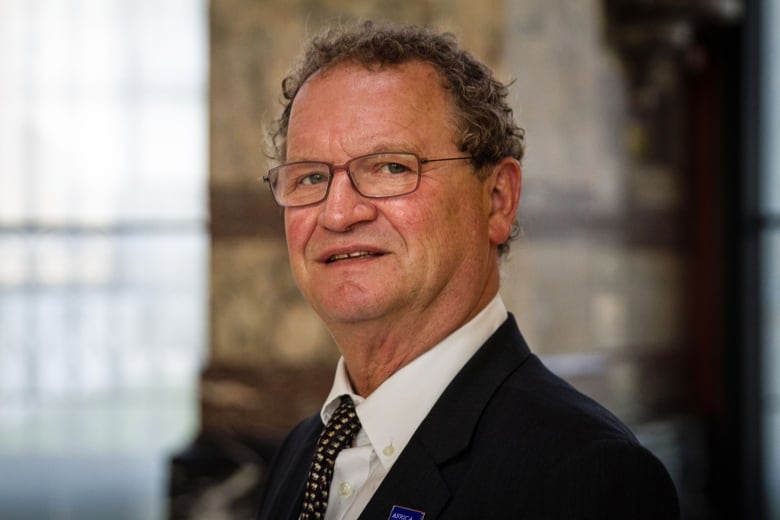 Museum director Guido Gryseels has led the revamping of the museum's look and message. (Lily Martin/CBC)

Leopold's private agents were given free rein in his African empire. They used slave labour to satisfy Belgium's hunger for rubber and other natural resources. Those who fell behind in delivering their quotas could be punished with the loss of a limb, or worse.

Gryseels says it is an emotional issue for many Belgians, who will have had relatives who worked in Congo in one form or another over the years, in particular after the Belgian government took over from the king in 1908.

"Many people are very nostalgic about the past," he said. "For many Belgians, our museum is a symbol of the times when Belgium was still a major power, in 1961, one of the richest countries in the world thanks to colonialism. And, of course, now it's gone down."

Immigration from Belgium's former colonies, which also included Rwanda and Burundi, was not actively encouraged before or after Congo gained its independence in 1960.

But the Central African community here numbers well over 100,000 people. Whether to engage with the museum as it tries to reform and rebrand itself has been a difficult question for many. 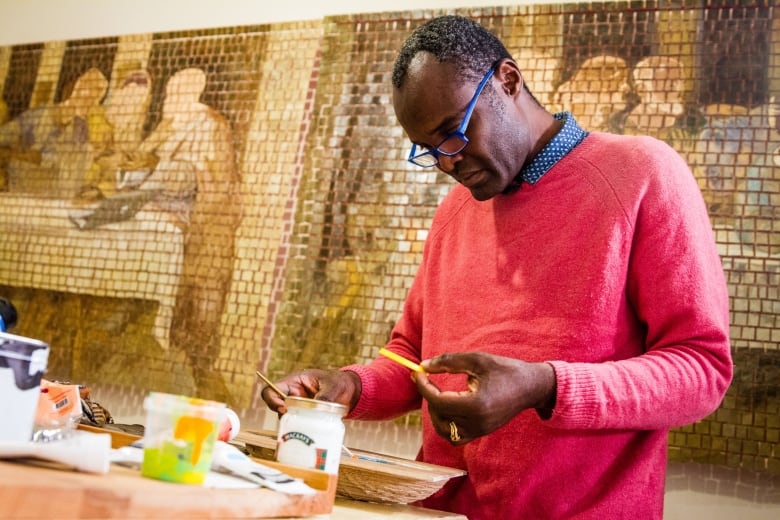 Artist Aimé​ Mpane won a competition to design an installation for the main rotunda of the new museum.

It will serve as a contrast to statues still in place from the old era, portraying colonizers as civilizers, including a golden piece depicting African children cowering at the feet of a cross-bearing missionary. 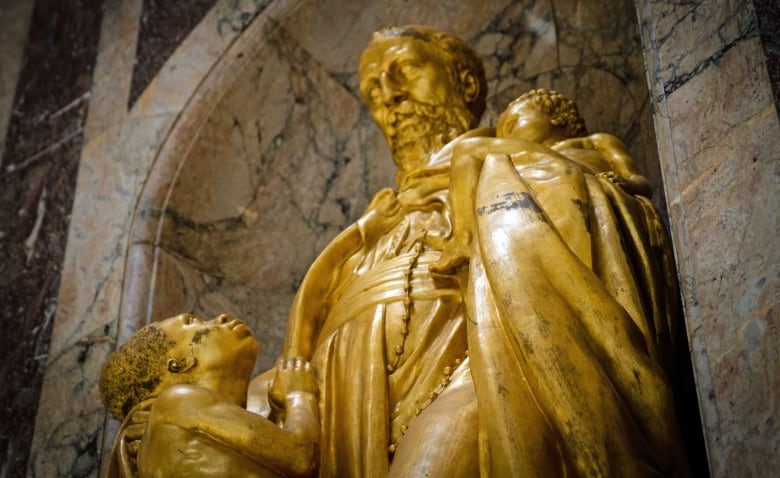 A statue of a missionary and a young boy at the museum. (Lily Martin/CBC)

Mpane's piece, titled New Breath, is a giant latticework head sculpted from wood and placed over a crown etched on the floor of the rotunda.

"I [wanted] to create one big piece that will take the place of King Leopold II," he said. "That will replace this story, which links us all, with the good and the bad."

The work also features a plant that seems to grow from the top of the head, in place of a crown, and draws the eye upward.

"There's always a link between what's on the ground and what's in the sky," he said. "And that's to show the idea of genesis, of rebirth. We can rise above our past and reach something that's ours." 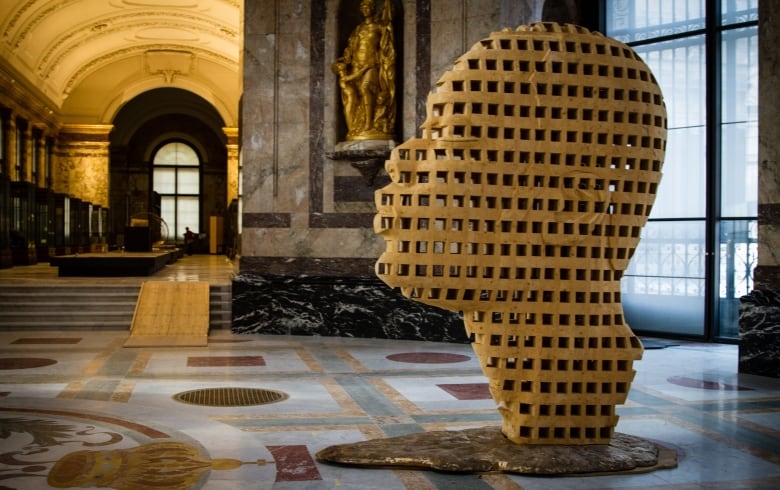 Mpane says he initially had doubts about taking part, despite reassurances that proper context would be provided for the colonial statues.

"But when I started to dig a bit deeper into it, I realized we're really talking about our history and we must try to make sense of it. If we don't take part in it, who is going to do it?"

Others say true contrition for the wrongs of the past would require returning all the cultural artifacts taken from colonial Africa now lining the museum's shelves, from ritual masks and sculptures to tribal drums and a wooden canoe carved out of a single log.

The debate in Belgium comes in the wake of a report commissioned by French President Emmanuel Macron that recommended the return of thousands of items taken from former French colonies without consent.

The report, which was penned by the French historian Bénédicte Savoy and Senegalese writer Felwine Sarr, has sparked debate in other European countries including Germany and Belgium.

The current Belgian king, Philippe, changed his mind and decided not to attend the Royal Museum's reopening this weekend in the wake of the controversy. Activist Mireille-Tsheusi Robert says the museum should return its colonial artifacts to where they were taken from. (Lily Martin/CBC)

"I think that giving back these works of art is a question of law and justice," said activist Mireille-Tsheusi Robert, who came to Brussels at the age of three with her Belgian father and Congolese mother.

"The original owners whose objects were stolen are villagers, chieftains, whole villages — in short, a country."

Keeping the works of art sends the message: "We vanquished them," she said.

For now, returning the artifacts is a step too far for Gryseels, although he acknowledges the role of the museum in Belgium's failure to see itself as a multicultural society and to reflect the diversity of its population in its public institutions.

"For most Belgians, their first encounter with Africa is through a visit of our museum. If then, in this museum, you get the impression that Africans don't have a culture of their own, that the European view is superior, then you can't be surprised that that has an impact. So we take our responsibility."

To really change though, the country as a whole must take on that responsibility, many Belgians say. To carry it out of the museum and into mainstream society.

Kompany says he believes his election is a sign Belgium is headed in the right direction.

But he also says the country must work much harder to acknowledge the past if it wants to free itself from it.

"When it comes to history, there is no compromise," he said. "Only ignorance."