With exactly a month to go until the start of the Scotties inside the curling bubble in Calgary, Team Jennifer Jones has firmed up its roster.

Longtime lead Dawn McEwen is pregnant and expecting in April, and will not enter the bubble. That means Lisa Weagle assumes the role for the entire event.

“I’m really excited to have the chance to play. You never know when you’re going to get back to another Scotties again so it’s nice to have that clarity,” Weagle told CBC Sports.

“Obviously we wish Dawn was there with us as our five-person team but she’s got a baby to prepare for and we’re really thrilled for her.”

When Team Jones made the announcement that Weagle would be joining them after being blind-sided by the news she had been let go from Team Rachel Homan last March, eyebrows were raised across the curling world about the decision — many wondered how they would determine who would play what games.

“We made that decision for a variety of reasons. Obviously illness or injury or pregnancy were a few of those reasons and it worked out perfectly,” Jones told CBC Sports.

After wearing the Ontario colours for years, Weagle is now ready to put on the Manitoba stripes and compete with what she calls a “powerhouse” curling team.

“I’m really excited. It’s been something to look forward to. And to be there with a new team. It feels like I’m a kid again. I have that sense of gratitude and the passion is back,” Weagle said.

“I’m just happy I was able to land on another world-class team. My family and friends have ordered a bunch of Manitoba hoodies and hats. They’re all in now.”

The team was able to play in a couple of events this past fall in Kitchener, Ont. Both Jones and Weagle say it was an immediate fit.

“We’re really fortunate that Lisa is a world-class lead. It feels like we’ve been playing with her for a really long time,” Jones said.

Weagle says the team has spent countless hours on Zoom and FaceTime, planning and strategizing for the Scotties.

“We just have this amazing knowledge base we’re able to build on,” Weagle said.

Team Jones still has the opportunity to add a fifth player to its roster.

“We haven’t made that determination yet. The original plan when we put this team together was that we’d be a five-person team and we’re super happy for Dawn that she’s expecting,” said Jones. “The timing just doesn’t work for her right now and we’re totally supportive of that.”

The Scotties bubble is set to begin on Friday, Feb. 19 with the championship game scheduled for Sunday, Feb. 28 — Curling Canada has said the field will include 18 teams this year due to unprecedented times in the midst of a pandemic.

“I’m beyond excited but also know that the world we live in these days, things can change any given second. We’re just taking it day-by-day,” Jones said.

Jones has won six Scotties titles as a skip, tied for most-ever with Colleen Jones.

Weagle has won the Scotties three times as a member of Team Homan.

But now a new chapter for these players is about to begin.

“At the end of the day, we all have the same goal and that’s to represent Canada.”

BRANDON, Man. — There was a time in Mike McEwen's curling career when he never imagined wearing a baseball hat on the ice for every game. Then, he joined Team Carruthers — and everything changed.

When McEwen wears a hat, the team is undefeated.

"Ssssshhhh," said McEwen when asked about it. "Yeah, there's a little streak."

The streak is now at 15 games. The Carruthers rink has not lost a game when McEwen and second Derek Samalgaski have both been wearing hats.

McEwen doesn't want to talk a lot about it. Superstition is a thing, to be sure.

But team lead Colin Hodgson is happy to chat about it.

"Once you're on a heater you can't stop it. So he hasn't taken it off," Hodgson laughed.

So how did this all start anyway? The team had just purchased a bunch of hats from Dynasty Curling — a show of support for Hodgson's curling apparel company.

The team was down in Arizona playing in the Ed Werenich Golden Wrench Classic at the end of January and were sitting with a 1-2 record. That's when McEwen and Samalgaski decided to wear hats.

They didn't lose another game at the bonspiel, finally winning it all with a 6-5 win over Kirk Muyres' Saskatchewan team in the championship game. 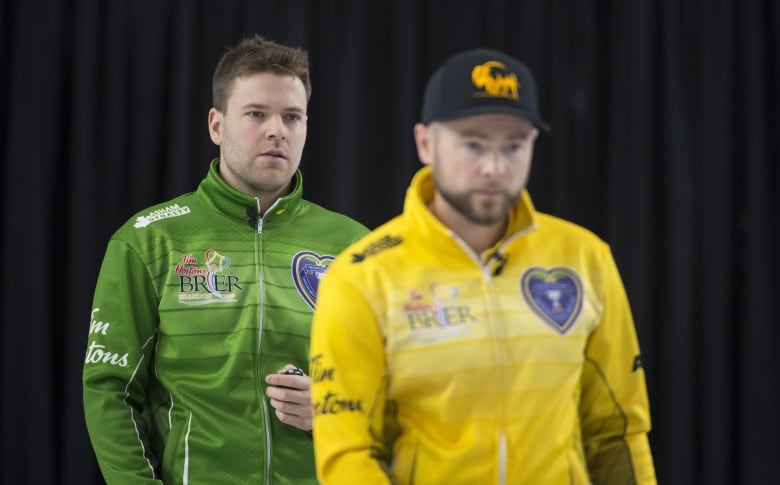 Hats may have proved the difference when McEwen, right, edged Muyres, left, by a hair at the opening day of the Brier. (Jonathan Hayward/The Canadian Press)

But for whatever reason, the team decided to take the hats off when they entered the Manitoba provincials for the first game.

They fell 9-5 to the 16th seed Terry McNamee forcing them to take the long road to the championship — they'd have to win three consecutive B-side games just to qualify for the eight-team playoff round.

"I guess we thought we were good enough to win without the hats," Hodgson said. "We fixed it in a hurry."

The rally caps came out after the loss, and the team has won every game since, including their opener at the Brier against Saskatchewan in a wild affair which saw McEwen, donning a black hat with a yellow bison embroidered on the front on his head, draw for two and the win in the tenth end.

Having fun and winning

McEwen says he's never had more fun on the ice. But at the same time, he admits that this season with a new team and a lot of adjustments is very difficult.

They seem to be figuring it out at exactly the right time.

"It's been a tough year but the personalities on the team make it easy," McEwen said. "Colin is a beauty. Reid is one of my very best friends. Derek is solid. These guys help me be the person I want to be on the ice."

Light-hearted. Not so serious. Easy going. These are the things McEwen says he has to remind himself of on the ice.

"It's taking me a long time but I think it's where I've learned I operate my best. Little bit of lightness, kick in the step," he said. "I'm very good at focusing. I've always been a player that's a good amount of intensity but that other part of it, being light, is when I operate at a better level. For my teammates too."

There's one player on the team not wearing a hat — the fashion man himself. Hodgson refuses to wear a hat, mostly because of his eye-catching hairdos.

Slicked back with enough gel for everyone on the team, Hodgson's hair certainly doesn't lack flair. Quaffed perfectly on the top, and then shaved tight at the sides — with a lightning-bolt looking design etched into the remaining buzzed hair. 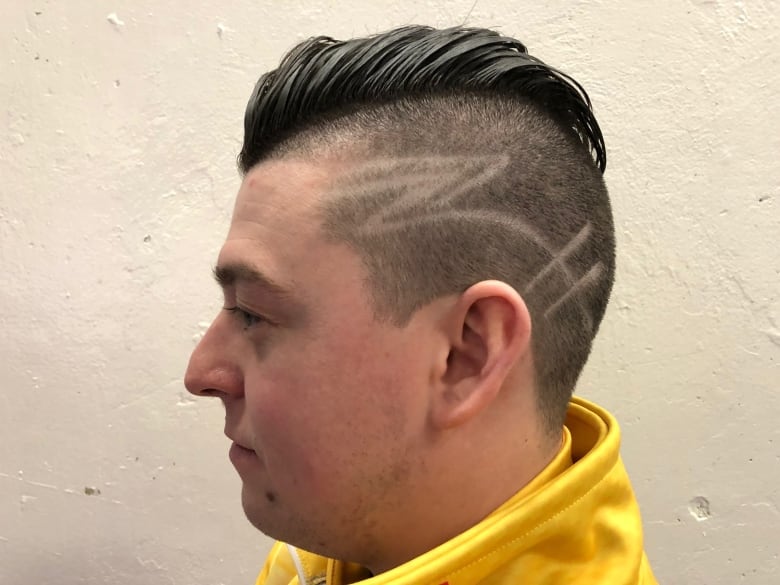 While the rest of his rink wears a cap, Colin Hodgon prefers to show off his hair design. (Devin Heroux/CBC Sports)

Suffice it to say Hodgson would never want to cover it with a hat. But there's more too it than that.

"The problem is, if you watch us sweep, Derek's chest drills me in the head a lot. My beak would hit his pec," Hodgson said. "My hair hits it sometimes but I put enough gel in it that it stays solid."

Hodgson won't be wearing a hat. But rest assured, the rest of the team will be. 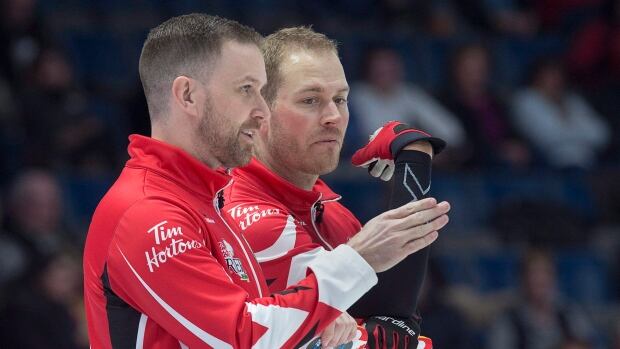 Gushue, from St. John’s N.L., came into the game as the skip with the most Brier wins of all time at 114, and he used that experience to capitalize on McEwen’s mistakes.

“It’s kind of neat,” said Canada coach Jules Owchar. “We always thought that Brad would have all the records when it was over, but I didn’t realize it was this.”

Owchar — who also coached Kevin Martin, four-time Canadian men’s curling champion and one of the top skips in Brier history — knows that Monday night’s game wasn’t easy for his skipper.

“I guess we kind of played defensive a little, like we didn’t take any chances tonight. I like to see a little more aggression,” he said.

Team Wild Card sits at 3-1 after the loss while Team Canada inches closer to a spot in the championship pool with four straight wins.

Alberta’s Brendan Bottcher stole four points in the first half and a four-ender in the seventh to force Greg Smith of Newfoundland and Labrador to concede in eight ends with a 9-2 loss. Bottcher heads into Tuesday’s morning draw tied with McEwen at 3-1. Smith dropped to 1-3.

“I think we’re in a good spot,” said Bottcher. “But we still got to win one tomorrow because we have Gushue and McEwen the last two games of this first round-robin [on Wednesday], so it’d be nice to stay at the one loss.”

Nova Scotia’s Jamie Murphy was looking to avoid a two-loss day after falling 6-5 in the morning draw to Team Wild Card, while Jamie Koe of the Northwest Territories was trying to prevent his third straight loss in the round robin. Koe emerged with a 7-3 win. Both teams now have identical 2-2 records.

The clock was working against Murphy as his team tried to blank the ninth end but ended up giving Northwest Territories a steal of one.

“We got a little bit of a break in 10, but we were really short on time so just kind of had to rush it and it didn’t work out,” said Murphy.

Thomas Scoffin of the Yukon took command in the second half and pressured B.C’s Sean Geall to concede 8-2 after nine ends. B.C. fell to 0-4 and Yukon improved its record to 1-3.

Carruthers (4-0) and his Winnipeg rink held on for a 9-6 win over Quebec. Quebec skip Mike Fournier (1-3) read the ice quickly and made some crucial draws in the first half of the game, and pulled to within a point of Carruthers after getting a steal of one in the eighth end.

Carruthers responded with two in the ninth end before Fournier conceded in the 10th.

“We had a pretty solid game. I had a chance in the eighth end to finish the game right there. There was a shot for four or five so, overall I felt we had pretty good control,” said Carruthers. “They started off with the hammer and we battled back, made it a goal for us to have the hammer tied up at halftime, you know for us, we were up one with the hammer. So, we accomplished our goals we set out for ourselves.”

Jacobs kept pace with Carruthers with a 9-4 win over New Brunswick.

James Grattan (1-2) struggled in the first half, allowing Jacobs to steal one in the second and fifth ends, followed by and easy three in the seventh.

Epping keeps the pressure on

Ontario’s John Epping (3-1) posted a 14-3 win over Nunavut’s Dave St. Louis to keep the pressure on the Pool B leaders. Nunavut fell to 0-4 and was the first team to be eliminated from the championship pool.

In a must-win scenario for both teams, host Saskatchewan improved to 2-2 with a 7-6 extra-end win over P.E.I.

Charlottetown’s Eddie MacKenzie took the lead in the third after a big double to score three. Saskatchewan skip Matt Dunstone started to show his frustration in the eighth after missing on the final rock, giving P.E.I a steal of one.

Saskatchewan third Steve Laycock’s experience was on display at the Brandt Centre, helping to set up Dunstone for two in the ninth. MacKenzie had a chance to win it in the tenth but his final rock overcurled to push the game into an extra-end.

Dunstone was able to draw for one with the hammer in the extra end.