The recommended quarantine time for close contacts of a positive COVID-19 case is being reduced by up to a week in the United States, but while some of Canada’s health experts say a similar approach could be useful here, others aren’t so sure.

The U.S.-based Centers for Disease Control and Prevention (CDC) announced Wednesday it had shortened the recommended length of quarantine after exposure from 14 days to 10 — or seven days with a negative test result.

Health Canada was still recommending a 14-day quarantine period as of Wednesday, but Dr. Zain Chagla, an infectious disease specialist at McMaster University in Hamilton, says cutting that time in half would be beneficial.

“It would be super important for the sake of incentivizing people to actually quarantine after exposure,” he said.

“And there’s a lot of different things that could theoretically open up — getting health-care workers back to work, getting kids back to school — a lot of ways where this could ease the burden of potential exposure in society.”

The CDC had previously said the incubation period for the coronavirus that causes COVID-19 could extend to 14 days, but the organization now says most people become infectious and develop symptoms between four and five days after exposure.

Chagla says the 14-day window was likely inspired from SARS data, where the incubation period was longer.

While isolation and quarantine are sometimes used interchangeably, Chagla says there’s a difference in the terms. Isolation is for those who have tested positive, while quarantine is for people who may or may not actually have the virus, like close contacts of positive cases or those travelling into Canada. Isolation recommendations for positive cases vary, but are typically 10 days after symptom onset.

Ashleigh Tuite, an epidemiologist at the University of Toronto, says a change in quarantine guidance reflects our evolving understanding of COVID-19.

“If you’re exposed, it takes a couple days for you to become infectious, so [seven to 10 days] should be enough to tell whether you’ve got the virus,” Tuite said. “But of course, that’s assuming your experience is reflective of the typical course of infection.”

The key to the CDC’s new guidance for Tuite is having the option to end quarantine at seven days with a negative test result. She suspects that’s in place to stop people who have the virus but no symptoms from ending the quarantine period too early.

A positive test at Day 7 would mean that person should continue to isolate, Tuite said, while a negative result would mean they could safely end quarantine, knowing enough time has passed since exposure to confidently assume they won’t still get sick.

Dr. Don Sheppard, the founder and director of the McGill Interdisciplinary Initiative in Infection and Immunity (MI4), says the CDC’s plan makes sense scientifically, but there would be logistical issues in testing every COVID contact in Canada who wanted to end their quarantine at Day 7.

“It’s impossible to do that,” he said. “It’s either 14 days of proper isolation, or it’s seven days with a negative test, and right now our system cannot offer seven days plus testing to the public at large.”

Canadians put their questions about the worsening COVID-19 pandemic to experts during an interactive two-hour special, hosted by Adrienne Arsenault and Andrew Chang. 1:39:27

Testing capacity does exist in certain situations, Sheppard said, like for health-care workers and other front-line staff that need a quicker quarantine to get back to work. He cautioned, however, that taking a test on Day 7 still means isolating for an extra day or two while awaiting results.

Quarantine also needs to be done solo in order to work, Sheppard added, warning that the CDC guidance isn’t meant as a loophole for holiday gatherings if your family isolates together for seven days before an event.

Supports for people to quarantine

He used an example of military recruits in the U.S. who were told to quarantine for 14 days before reporting to camp. A handful of positive tests (0.9 per cent) were caught upon arrival, suggesting true quarantine hadn’t been followed.

Those recruits were sent home while the rest underwent another group quarantine. When tested again two weeks later, the positivity rate had grown to 1.3 per cent.

“Why? Because there were people incubating and they turned positive. And those people infected others in their groups,” Sheppard said.

“So if you don’t do strict, single-person isolation, you don’t actually break the cycle of transmission, you just pass it around in your group.”

Tuite says that further illustrates the usefulness of a shortened quarantine period.

A mother with young children, or someone who shares a small apartment with another person will find it harder to properly quarantine for longer periods, she said, as will someone who can’t afford to take a full two weeks off work.

“It really comes down to having the means to do it,” she said. “Can you survive for two weeks if you’re not getting income? Can you isolate in a household with multiple people?

“We need to have support in place so that people can quarantine, and that doesn’t change whether it’s for a week or 14 days. But it becomes much more challenging when it’s for longer periods.”

A top U.S. health official said Gilead Sciences Inc’s experimental antiviral drug remdesivir is likely to become the standard of care for COVID-19 after early results from a key clinical trial on Wednesday showed it helped certain patients recover more quickly from the illness caused by the coronavirus.

The study, run by the U.S. National Institutes of Health, tested remdesivir versus usual care in 1,063 hospitalized coronavirus patients around the world. At the White House, NIH’s Dr. Anthony Fauci said the drug reduced the time it takes patients to recover by 31 per cent  — 11 days on average versus 15 days for those just given usual care.

Gilead earlier on Wednesday said remdesivir helped improve outcomes for patients with COVID-19 in the government-run trial, and provided additional data suggesting it worked better when given earlier in the course of illness. The statement sent its shares up seven per cent on the Nasdaq.

“The data shows that remdesivir has a clear cut significant positive effect in diminishing the time to recover. This is really quite important,” Fauci told reporters at the White House, likening it to a moment in 1986 “when we were struggling for drugs for HIV and we had nothing.”

“This will be the standard of care,” Fauci predicted, adding, “The FDA, literally as we speak, is working with Gilead to figure out mechanisms to make this easily available to those who need it.”

Several studies have painted a mixed picture of its effectiveness, and Fauci cautioned that the full data still needs to be analyzed.

“Although with 31 per cent improvement doesn’t seem like a knockout 100 per cent, it is a very important proof of concept, because what it is proven is that a drug can block this virus.”

Interest in Gilead’s drug has been high as there are currently no approved treatments or preventive vaccines for COVID-19, and doctors are desperate for anything that might alter the course of the disease that attacks the lungs and can
shut down other organs in severe cases, until a preventive vaccine emerges.

Gilead provided information on two clinical trials. The study conducted by the U.S. National Institute of Allergy and Infectious Diseases (NIAID), part of the National Institutes of Health, met its main goal of helping patients with a range of severity of COVID-19, the disease caused by the novel coronavirus.

Ok so it looks like there is a lot of confusion on this remdesivir news. Here is a lay person summary. <br> <br>There are numerous on going trials on remdesivir. Gilead, the manufacturer has 2- one in severe patients getting either 5 or 10 days, one in moderate patients w control arm.

Those preliminary results have been highly anticipated because it compares how patients who received remdesivir fared versus those given a placebo, meaning it should definitively demonstrate whether the drug provides benefit.

The trial’s lead researcher told Reuters on Friday that full results could come by mid-May.

“While a new study offers a glimmer of hope that … remdesivir has an effect against COVID-19, determination of its benefit for the general population must await release of pertinent details to evaluate the study’s findings and
scientific analysis comparing them to other studies of the drug that have shown mixed results,” he said in a statement.

Watch | Doctor talks of the ‘desperation, sadness and hope’ of life support

Dr. Nadia Alam of Georgetown, Ont., describes how one elderly patient didn’t want to be on a ventilator and how her children are afraid that she, too, may get sick. 10:28

Gilead also provided data on a study in severe COVID-19 patients it has conducted in dozens of medical centres, which does not have a placebo comparison but tested the drug given by intravenous infusion under five-day and 10-day regimens.

Gilead Chief Medical Officer Merdad Parsey in a statement said a five-day regimen, “could significantly expand the number of patients who could be treated with our current supply of remdesivir.”

Also on Wednesday, results were published by the Lancet medical journal of a trial conducted in China that concluded remdesivir failed to improve patients’ condition or reduce the pathogen’s presence in the bloodstream. Gilead said previously that those findings, released inadvertently by the World Health Organization last week, were inconclusive because the study was terminated early.

Gilead chief executive Daniel O’Day earlier this month said the company was prepared to donate 1.5 million doses of remdesivir to hospitals dealing with severely ill patients. Regulatory approval of the drug would also clear the way for commercial sales.

Remdesivir, which previously failed as a treatment for Ebola, is being tried against COVID-19 because it is designed to disable the mechanism by which certain viruses make copies of themselves and potentially overwhelm their host’s immune system.

The company is also studying the drug in patients with less severe COVID-19, but those results are not expected until later next month.

Dr Mike Ryan, head of the WHO’s emergencies program, told an online briefing it can sometimes take a number of publications to determine a drug’s efficacy.

“Clearly we have the randomized control trials that are underway both in the U.K. and U.S, the ‘Solidarity trials’ with WHO. Remdesivir is one of the drugs under observation in many of those trials. So I think a lot more data will come out,” he said.

Ryan added: “But we are hopeful this drug and others may prove to be helpful in treating COVID-19.” 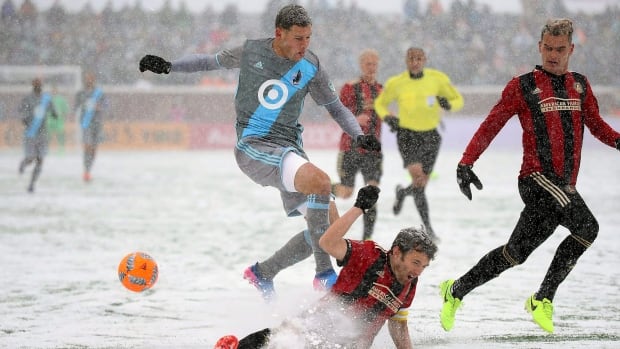 Major League Soccer is shortening its season by a month, going to single-elimination playoffs and scheduling its 2019 MLS Cup final for Nov. 10 in its earliest finish since 2002.

The league announced the change Monday and will have an all-knockout post-season in place of a two-leg format for the conference semifinals and finals. MLS had started using a two-leg, total-goals format in 2003.

After then-U.S. coach Jurgen Klinsmann criticized the league's season as being too short, MLS stretched in schedule into December each year starting in 2012. Klinsmann was fired in November 2016.

MLS says the new format will reward teams with top regular seasons with greater home-field advantage. Only the top two teams in each conference will get first-round byes.