Simon Pegg is opening up about Star Trek Beyond’s lackluster box office performance, and has some specific ideas regarding why the movie failed to connect with audiences as well as its predecessors had.

Speaking with Geek Exchange recently, the actor — who played Montgomery “Scotty” Scott in the rebooted series and co-wrote the third film — said he felt the film was “poorly marketed,” which resulted in it under-performing financially.

“If you look at a film like Suicide Squad, that was around for such a long time before it finally came out and people were so aware of it. Whereas with Star Trek Beyond, it was left too late before they started their marketing push,” Pegg shared. “It still did great business, but it was disappointing compared to [Star Trek Into Darkness].”

By comparison, Into Darkness earned a worldwide box office gross of $ 467.3 million off a $ 190 million budget.

Some fans of the franchise have said the film’s first trailer — which was set the Beastie Boy’s “Sabotage” and focused primarily on the movie’s action sequences instead of its characters or levity — turned them off to the idea of watching it.

According to Pegg, the trailer actually spoiled the movie’s major climactic scene.

“I was really angry about that,” he said. “[The trailer] used ‘Sabotage,’ which was our surprise moment in the end. It was supposed to be a very fun and heightened twist, and something that was a big surprise and they blew it in the first trailer, which really annoyed me.”

Pegg also lamented the fact that the promos “made the film look like a boneheaded action film.”

While Pegg was disappointed about the film’s advertising campaign, the 48-year-old actor — who is currently appearing in Steven Speilberg’s new sci-fi epic Ready Player One — he appreciated the love the film ended up getting from many fans.

“From a professional standpoint for me, it was such a great experience in the end, because the critical response that we did get was exactly what [co-writer] Doug Jung and I and [director] Justin Lin had hoped for.”

As for the upcoming fourth film in the franchise, Pegg explained that there is “a script that’s been written.” However, things are somewhat up in the air amid the news that Quentin Tarantino could be involved with the creation of the next installment in the franchise.

“There’s also the story of Quentin Tarantino coming and chatting with J.J. [Abrams] about an idea that he’s had for a long time. That idea is going into the writer’s room to be looked at,” Pegg said. “I think it might take something like him to restart it.”

The actor admitted that Tarantino penning a Star Trek script could actually be “an interesting proposition.”

“I don’t know if that means everybody will be blowing each other’s heads off with phasers and calling Klingons mother f*****s, but, who knows?” Pegg said. “That could be fun.”

However, before any iteration of a new Star Trek hits the big screen, Pegg will also be starring alongside Tom Cruise in the upcoming Mission: Impossible – Fallout.

ET’s Cameron Mathison caught up with Pegg at the Hollywood premiere of Ready Player One on Monday, and he opened up about working alongside Cruise for the third time in the series, and the wild stunts the movie promises — including one that led to Cruise getting seriously hurt.

“It was almost a year [of shooting]. We took some time out [of production] because Tom broke his foot, but he recovered in a bizarrely quick way as only he probably would,” Pegg joked. “[But] it’s crazy what we do in this one. I mean, it’s falling off things again, but higher and more dangerous.”

According to Pegg, the take showing Cruise’s injury is actually in the film. “Your foot shouldn’t touch your knee, not on the same leg. But it did and it’s gross,” he joked.

While he said he’s impressed by Cruise’s dedication, he’s concerned about the star’s determination to one-up himself in each Mission: Impossible film.

“I worry because every time we do one he has to kind of raise the bar and at some point that’s going to mean death,” Pegg said.

A Look Back at Tom Cruise’s Most Dangerous Movie Stunts Ever — Watch!

EXCLUSIVE: ‘Star Trek Beyond’ Cast Says They Feel Like They’re ‘Morphing Into the Original Cast’

Tom Cruise Says His Ankle Is ‘Still Healing’ After He Broke It on ‘Mission: Impossible 6’ Set

If U.S. officials wanted to provoke a sharp response from China, they got one.

Comments on the internet here burst out Friday with insults and invective, calling U.S. President Donald Trump a “shortsighted bully.” They threatened war, and not just the kind over trade, echoing the kind of language being used on the other side of the Pacific.

Trump is proposing tariffs of up to $ 60 billion on Chinese goods as punishment for what U.S. officials call Beijing’s “economic aggression.”

“Trump acts like he is a hoodlum when he loses money to China,” posted a Chinese internet user named Wind. “Luckily China has a strong military now.” 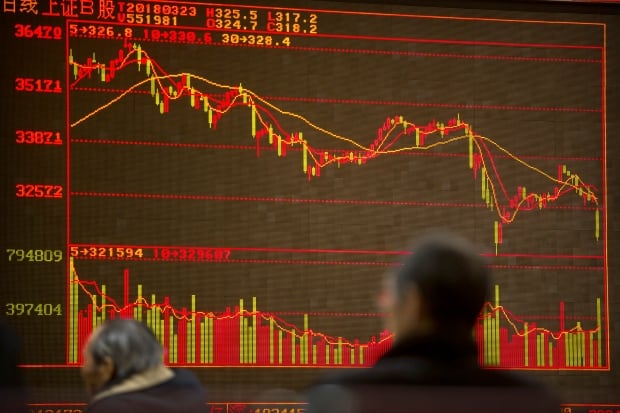 There was plenty of official reaction, too. The trade blast from Washington — and accusations that China is stealing U.S. industrial secrets and abusing American firms — brought blowback from the Chinese ambassador to the U.S.

Americans “should not believe that they have a monopoly over innovation and everybody else is just stealing from them,” said Cui Tiankai. “I think this is a kind of discrimination.”

The United States is adopting a “Cold War mentality,” said China’s official news agency Xinhua. It is showing “panic” over China’s rise, one that threatens to overtake the U.S. as the biggest economy in the world.

None of this indignant reaction comes as surprise in today’s China. Perhaps more than ever, the country is projecting confidence in its place in the world and a conviction of its economic and military power.

There is a strong “Make China Great Again” undercurrent, stoked by President Xi Jinping’s frequent appeals to nationalistic pride and his dark warnings to anyone who challenges its intentions or territorial integrity.

“All manoeuvres and tricks to split the motherland are sure to fail,” Xi said at the closing of China’s parliament earlier this week in Beijing’s Great Hall of the People. “Not one inch of the territory of the great motherland can be carved off from China.”

Carving off its revenue seems to be equally unacceptable. 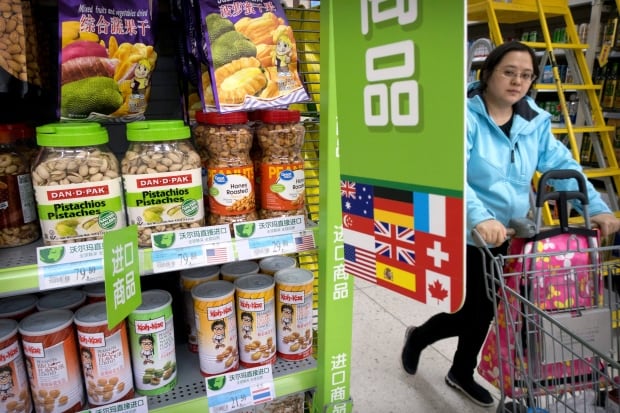 A woman pushes a shopping cart past a display of nuts imported from the United States at a supermarket in Beijing on March 23, 2018. (Mark Schiefelbein/Associated Press)

But it’s the bluntness of the attack from Washington that leaves Xi with little choice but respond in kind, say Beijing political observers.

“I think right now there’s no room for China to make concessions or to back off,” says Zhao Hai from the National Strategy Institute at Tsinghua University. “I think they have to be very strong and tit-for-tat in terms of trade measures against the U.S.”

It is a direct challenge to China’s leadership, he says.

“President Xi has just consolidated power and started to carry out his ambitious plan for the future of China. So at this moment, the leadership cannot be seen as weak or wriggling or giving up to the U.S. side,” says Zhao.

Zhao does believe there is room for compromise, but it has to be done discreetly, almost secretly.

He also believes Washington has left some time for a deal.

In a presidential memorandum signed by Trump on Thursday, there will be a 30-day consultation period that only starts once a list of targeted Chinese goods is published.

That leaves a chance for potential talks to address Trump’s allegations on intellectual property theft and forced technology transfers from U.S. companies who want to do business in China.

Indeed, despite the accusations, Trump said he views China as “a friend,” and both sides are in the midst of negotiations. A Chinese Commerce Ministry official said both sides were in touch and communication channels were smooth. 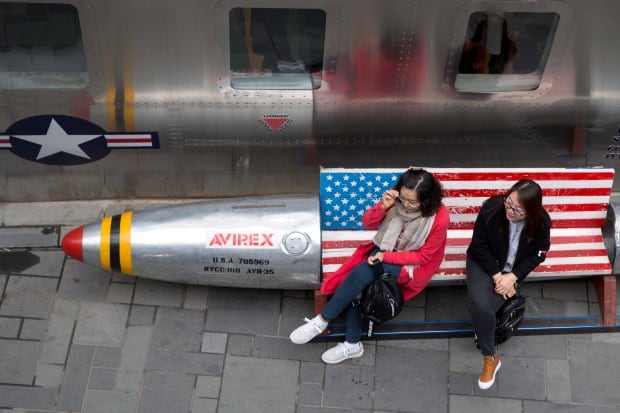 Chinese women sit on a bench with a U.S. flag theme outside an apparel store in Beijing on March 23, 2018. (Ng Han Guan/Associated Press)

Meantime, China did move to retaliate by declaring plans to impose additional duties on up to $ 3 billion of U.S. imports, including fresh fruit, wine and pork — as well as metal pipes — in response to import tariffs that were due to go into effect Friday on Chinese steel and aluminum coming to the US.

“The first shot in the largest trade war of the 21st century was fired by the U.S.”

He is less optimistic of a negotiated solution in time to head off real damage to both sides.

“Let’s assume that Chinese leaders are willing to compromise a little bit,” says Xie, “but that compromise will take at least six, seven months to really have an effect felt and seen by the American government, one that satisfies them.”

Still, many here aren’t convinced Chinese leaders are willing to compromise. And based on public reaction so far, it’s not clear the Chinese people want a deal with Trump.

“Many are saying, let’s have a trade war,” says Xie. The Reddit co-founder isn’t just buying his daughter books, however. Ohanian took to Instagram to show off a mini version of Thor’s hammer he got for Olympia, as she prepared to see Thor: Ragnarok.

“Junior’s first movie. Mama needed a day off to relax. I rented out the whole theater, so we would be able to just have the family and some friends, the squad and Junior,” Ohanian said in the video, before focusing the camera on Williams sleeping on his shoulder. “Of course mama fell asleep,” he wrote.