​To get past Belgium in the quarter-finals at the World Cup, Brazil has to do something it has not been able to do since it last won the tournament in 2002: overcome European opposition in the knockout stages.

Since beating Germany 2-0 in the 2002 World Cup final, the five-time winner has been eliminated by European sides in the three subsequent competitions. Brazil lost to France and the Netherlands in the quarter-finals of the 2006 and 2010 World Cups and was humiliated 7-1 by Germany in the semifinals four years ago at home.

The core of that side remains in place in Russia, where Belgium has won all four of its matches, including coming back from 2-0 down to beat Japan in the round of 16 with a thrilling counterattack in the final seconds of injury time.

Everything you need to know ahead of Brazil and Belgium's quarter-final match on Friday. 1:00

Everyone knew about the array of talent running through the Belgium side, from Thibaut Courtois in goal to Kevin De Bruyne in midfield and Eden Hazard and Romelu Lukaku up front. The main questions following disappointing defeats in the 2014 World Cup and the 2016 European Championship centred on the team's character.

That 3-2 victory over Japan was the first time a team has overcome a two-goal deficit to win outright since West Germany beat England in 1970, and the first to do it in regulation since Portugal came from three down to beat North Korea in 1966. It has fueled confidence inside the Belgium camp that it can deal with adversity and make the World Cup semifinals for the first time since 1986.

"Maybe it's this sort of match that we needed for the future," said Hazard, the captain.

England hasn't won the World Cup since 1966, but Rob Pizzo shows that the road ahead looks pretty favourable.​ 1:46

Coach Roberto Martinez won praise for his substitutions, with both Marouane Fellaini and Nacer Chadli scoring, the latter with practically the last kick of the match.

Unlike the game against Japan, Martinez said, Belgium will be the underdog Friday in the quarter-final in Kazan, and as such, should play with a certain amount of freedom.

"I think it's a game that when you are a little boy, you dream of being involved in a World Cup, facing Brazil in a quarter-final," he said, "so from our point of view we can enjoy from the first second."

Brazil coach Tite dismissed talk that his team is the favourite to win the match against Belgium, let alone the World Cup.

"Everything is open, up for grabs," he said.

The winner will play France or Uruguay in the semifinals in St. Petersburg on Tuesday. 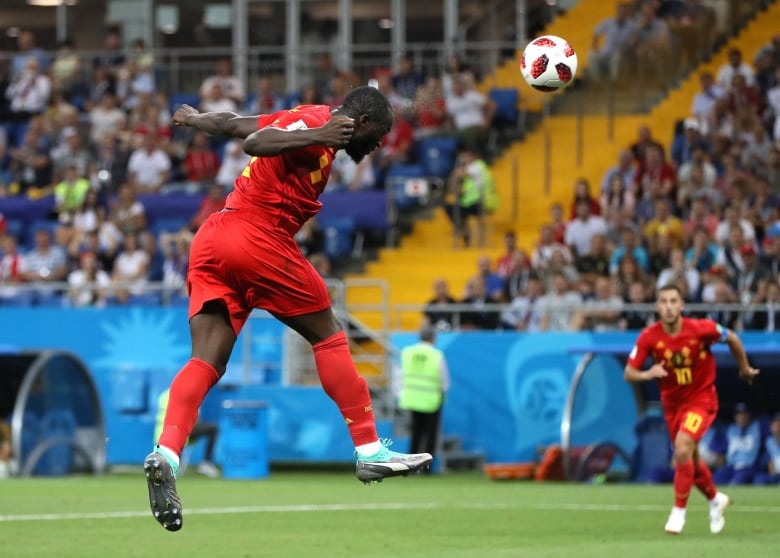 Belgium is the competition's top scorer with 12 in its four games, with the goals spread around the team. Lukaku has four but seven of his teammates have scored, too.

Though Brazil has yet to hit the heights on the attacking front, it and Uruguay have been the meanest defences in the competition, conceding just one goal apiece in four matches.

There is a worry for Brazil heading into the Belgium match: The team will be without midfielder Casemiro, who is suspended after picking up a second yellow card in the 2-0 win over Mexico in the round of 16. Casemiro has provided a strong shield in front of the Brazilian defence. One option could see Fernandinho come into the side for a role he is accustomed to playing at Manchester City.

As has been the case throughout this World Cup, Brazilian forward Neymar will likely garner much of the attention during the match, both for his skills and speed as well as his on-field theatrics. Neymar will have to be careful not to pick up another booking as he would miss a semifinal should Brazil prevail. Others walking a tightrope are midfielder Philippe Coutinho and defender Filipe Luis.